It happens very rarely that the final of a major tournament lives up to the pre-game hype. But the FIFA World Cup 2018 final was one of the most exciting games of the competition as France almost outplayed Croatia 4-2 to lift the coveted trophy. The entire world, including a bunch of cricketers, were engrossed in the game on Sunday.

What an amazing day. Congratulations 🇫🇷 and 🇭🇷 on a brilliant final. @Hublot #FIFAWC2018Final pic.twitter.com/uak78O4zMS

Former India skipper Sourav Ganguly was also at the Luzhniki Stadium. After covering India’s second ODI against England at Lord’s, Ganguly hopped on a flight from London to Moscow for the game. He shared a selfie with the trophy prior to its presentation. His tweet read: “World Cup Final at Moscow”.

Master Blaster Sachin Tendulkar posted an image of himself enjoying the game on television. He tweeted: “Watching the final.. #FACRO”.

Virender Sehwag expressed his awe of teenager Kylian Mbappe. He wrote, “Majestic Mbappe, the 2nd teenager after the great Pele to score in a #WorldCupFinal”

Majestic Mbappe , the 2nd teenager after the great Pele to score in a #WorldCupFinal pic.twitter.com/BlrcDBH4ej

The focus will now shift back to the cricket, with India taking on England in the third and the final match of the ODI series at Headingley on Tuesday, following which both sides will lock horns for a five-match Test series, starting August 1. 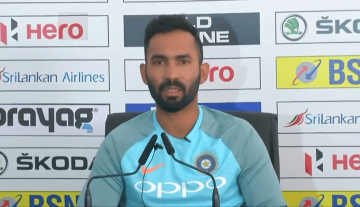