India women’s team registered a 3-0 clean sweep over England after winning the final ODI by 16 runs. Even with England nine wickets down, Charlie Dean almost took the hosts to the brink of victory. However, Deepti Sharma ran her out at the non-striker’s end as she was taking undue advantage, to seal India’s win. The 20-year-old was heartbroken as she walked away in tears after shaking hands with the Indian cirkceter. Dean had walked in with England reeling at 65 for seven while chasing 170.

The moment when Deepti Sharma sealed the match for India. pic.twitter.com/gqQtJjdMGJ

Captioning the video Women’s CricZone wrote: “What’s your take on this? A: What Deepti did was spot on! B: Hey mate, where is the spirit of the game? C: Stay within the laws (crease) or get OUT! Comment below! #ENGvIND | #DeeptiSharma | #ThankYouJhulan”

What’s your take on this?

A: What Deepti did was spot on!

B: Hey mate, where is the spirit of the game?

C: Stay within the laws (crease) or get OUT!

Dean put on a 38-run partnership with skipper, Amy Jones. Even after Jones and Kate Cross were dismissed in quick succession, Dean kept England ticking in the chase. She was eventually running out on 47 by Deepti as India won the game by 16 runs to sweep the series.

Notably, this was Jhulan Goswami’s last international match, as she had decided to retire after this game, Jhulan bows out of the sport, having played 12 Tests, 204 ODIs and 68 T20Is for the Indian women’s team. Having taken two wickets in the match, Jhulan ends her career with 255 ODI wickets, the most by a women’s player in the format. She also took 44 Tests and 56 T20I wickets.

Veteran England fast bowlers Stuart Broad and Jimmy Anderson expressed their disapproval over the controversial run out in the third ODI between India and England women’s teams.

Here is how the cricketing fraternity has reacted to the incident:

MANKAD AT THE HOME OF CRICKET. DEEPTI, You're so iconic to do that girl

Mankad is a Run out now and she was well in her right to run her out.

Why the hell are you trending Ashwin? Tonight is about another bowling hero @Deepti_Sharma06 🤩👏

I find the debate of the Mankad really interesting. So many views from either side. I personally wouldn’t like to win a match like that, also, very happy for others to feel differently https://t.co/BItCNJZqYB

A controversial ending but…India win by 16 runs and complete a series sweep against England. 🇮🇳 pic.twitter.com/gsBpqDcXNp

A run out? Terrible way to finish the game

Imagine a World Cup final. 1 to level scores. Non-striker charges down for a single and is in by a quarter of an inch. Suppose it turns out that she had the left the crease before the ball was bowled. Would that be fair? Would running less to win be in the spirit of the game?

If you are outside the crease when the bowler is about to deliver a ball, you are either irresponsible or you are cheating. The bowler must run you out if she can.

If the batter is attempting to gain an unfair advantage, it is absolutely legitimate to try and prevent it. Superb stuff, India. Love it. #ENGvIND https://t.co/myKA5uMzlb

Game awareness from Deepti Sharma. A no ball at #ICC #CWC22 in New Zealand to the series win #ENGvIND @HomeOfCricket @BCCIWomen pic.twitter.com/tsRU0BiVOs

Nicking the ball to first slip and standing your ground as if nothing happened, is actually terrible. A Run-out isn’t. I guess, Match Refree Chris Broad needs to educate his son on the laws of cricket 😃 #CricketTwitter #ENGvIND https://t.co/yNlKPnMkGl

Lol really? Using a rule to their favour is still better than winning a world cup through series of wrong umpiring decisions. https://t.co/5MSRdXSYVb

Will never understand why players feel the need to do this. Is she stealing ground? pic.twitter.com/KJi1Rgzmdi 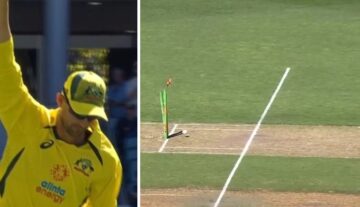 Twitter Reaction
By CricShots - Nov 17, 2022
Ashton Agar Impresses Netizens As With His Brilliance On The Field