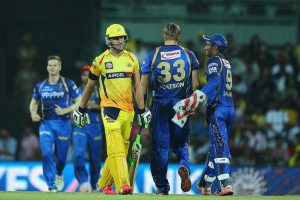 After two years of long ban due to spot fixing issues, Chennai Super Kings and Rajasthan Royals will make a comeback in the next year’s IPL. IPL 11 will witness a totally fresh bidding for the teams.

In 2015, after banning of CSK and RR, Gujrat Lions and Pune Super Giants too were asked to choose five players each from both the squads. The rest of them went for an auction.

When asked whether BCCI is looking forward for the announcement of player retention, George John, Director of CSK  Ltd commented:

“We have not been told about the player retention policy but we will look to try and get all the main players who played for CSK.”

CSK has been quite popular and successful in all the eight years of IPL. Reason being that they were able to retain maximum players and support staffs for their camp each year. So the franchise will leave no stones unturned to do the same. They have also voiced an urge to again rob in their captain MS Dhoni by any means.

“We would want to retain the old support staff. We are in talks with Stephen Fleming and Michael Hussey,” further added George John in an event in which the team signed a partnership agreement with Tekplay Systems.

Rajasthan Royals on other hands have submitted a petition urging to change the franchisee name. But BCCI made it clear that if they do so, they have to change their base camp location too.