On Thursday, India and Bangladesh will lock horns with each other in the semifinals of the ICC Champions Trophy 2017. Bangladesh defeated New Zealand to reach the semis, while Indian team shocked South Africa on Sunday to make way to the knockout stage.

India and Bangladesh have a plethora of remarkable clashes against each other in ICC tournaments. Right from the odious time, the two nations met in World Cup 2007, to the recent World T20 2016. Each of these clashes gave us some unforgettable moments.

Here are 5 such marvelous moments from India-Bangladesh battles in ICC tournaments.

India had a forgettable outing in World Cup 2007. Though India made the history by reaching the 400 mark for the first time in the World Cup history against Bermuda in 2007 World Cup, still they lost the other matches against Sri Lanka and Bangladesh.

This was a first match of the tournament for the men in blue and Indian skipper Rahul Dravid chose to bat first. However, slow pitch and contained bowling by Bangladesh restricted the Indian batsmen to a diminishing score of 191 runs.

In second innings, Indian bowlers picked some wickets, but half centuries from Tamim, Mushfiqur and Shakib helped Bangladesh to chase down the total in the 49th over and gave India a demoralizing start to the tournament.

After winning the first edition of World T20 in 2007, India was assumed to deliver phenomenal performance in the next edition held in England in 2009. India faced Bangladesh in Nottingham and elected to bat first. Gambhir scored a half-century and Yuvraj also amassed 41, as India made 180/5.

India’s left-arm spinner, Pragyan Ojha was making his T20I debut, picked 4/21 to conquer Bangladesh and restricted them to 155/8 and India won the match by 25 runs. Pragyan Ojha won the Man of the Match award on T20I debut.

India and Bangladesh played inaugural game of the ICC World Cup 2011 at Mirpur and it kick-started the tournament. Bangladesh was hosting the World Cup for the first time along with India and Sri Lanka.

Bangladesh won the toss and Shakib asked India into bat first. The decision proved to be a drastic one for them as Virender Sehwag (175) and Virat Kohli (100*) devastated Bangladeshi bowling attack with a 203 run partnership. Sehwag was ruthless as he started the tournament with a four.

Virat Kohli scored a hundred in maiden World Cup match and announced his arrival in the world cricket. India ended up scoring 370/4 in 50 overs.

The half-centuries from Tamim Iqbal and skipper Shakib brought a life into the match, but Munaf Patel’s 4/48 sealed the deal for India. India won the match by 87 runs and started on a good note in the ICC World Cup 2011, a tournament they won in the end, with MS Dhoni hitting a six to lift the trophy after 28 long years. 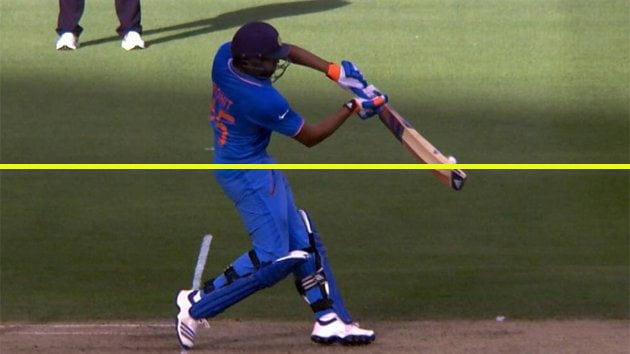 The ICC World Cup 2015 quarter-final match against India was a memorable one for Bangladesh, as it was the first time, they had made it to the knockouts of the World Cup by forcing England to make an exit from the tournament in league stages.

However, the match was remembered for a whole different reason and it was the controversy happened during the 40th over. Rohit Sharma pulled a full toss to the square leg and was caught out, but leg umpire Aleem Dar called it a no-ball. This gave Rohit a respite. However, the replays showed that it was close call and Bangladesh exploded in outrage and BCB president decided to lodge an appeal after Bangladesh lost the match.

Bangladesh looked of the game in the chase, as they kept losing wickets when a partnership was building. Umesh Yadav got 4/31 and Bangladesh was bundled out for 193 runs and India won by 109 runs and Bangladesh’s World Cup 2015 came to an end.

The Indian team had lost their first match of the World T20 2016 to New Zealand in a shock result. They had to win all of their remaining matches to keep hopes alive of a semis spot. Bangladesh was in a good knick and both faced each other in Bengaluru.

Bangladesh won the toss and asked Dhoni to bat first. Indian team somehow dragged 146/7 on a very slow wicket. Suresh Raina was the top scorer for the men in blue with 30 and Al-Amin and Mustafizur Rahman took 2 wickets each to put restrict India.

Tamim Iqbal (35) and Sabbir Rahman (26) gave Bangladesh the dream start, though Indian team pegged them back with wickets. But Mushfiqur and Mahmudullah brought them to the verge of a win when they needed 11 runs off the last over.

It was bowled by Hardik Pandya and Mushfiqur smashed two fours and even celebrated the win after hitting the second boundary. Now 2 were needed off 3 balls. But here is where the match changed, as both Mushfiqur and Mahmudullah departed, trying to hit the winning shot on the leg side.

Bangladesh needed 2 to win and 1 to tie on the last ball and after much talk in the middle, Hardik bowled a short bowl outside off, which Dhoni gripped and ran the fastest 60-70 meters of his life to run Mustafizur out and men in blue won the match by 1 run.