Indian team has put up a mind-blowing show on Sunday to fix their spot in the semi-finals against Bangladesh. The extensive victory has helped Virat Kohli and co. to become the table-toppers of Group B in the Champions Trophy. India completely dominated the match and appear to have found that momentum that was missing against the Sri Lankans. Here are five things that India did better than South Africa on Sunday: 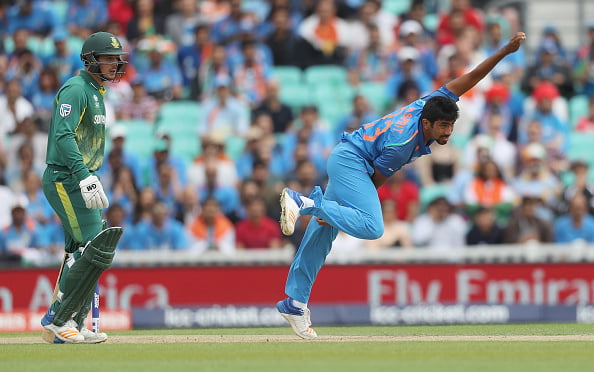 Indian team came up with definite plans for the South African batsmen and went on to execute them successfully. The addition of Ravichandran Ashwin into the squad made a huge impression as he dismissed Hashim Amla early in the innings and set India on their way. Even Bhuvneshwar Kumar stopped the flow of runs against Quinton de Kock while Jasprit Bumrah was hurling remarkably from the other end. South Africa eventually was forced to play unsafe shots and threw away their wickets.

On Sunday, Indian team showed some excellent fielding, as they responded blazingly after the last game versus Sri Lanka. They choked the South African batsmen and kept them in check throughout the first innings. The Indian fielders, especially Jadeja, Kohli and Pandya produced some magnificent run-outs that turned the course of the game in India’s favor. MS Dhoni too did what he did best to take the bails off in a split of a second and end AB De Villiers run in the tournament.

3. Batting out the difficult overs

India was ready to barter the first few overs against the bowlers like of Rabada and Morkel really well. Despite the breezy conditions, Indian batsmen held their plan and began slow before showcasing their intrepidity on the bowlers. Imran Tahir was just not allowed to settle in and Dhawan and Kohli punished him and the others later in the innings. Kohli particularly played a flawless reserved ODI innings keeping in mind the short target to chase.

Despite Rohit Sharma getting out early in the innings, Kohli and Dhawan batted with perfect understanding to get India over the line. Kohli played carefully and allowed himself all the time in the world to get used to the pitch. In the meantime, Dhawan continued his love affair with English conditions and the Champions Trophy to smack yet another fifty with the help of many boundaries and a towering six.

5. India had complete command over the game

Right from the beginning, India came out confidently to win the game. The cricketers were prepared to concentrate on what was necessary and were restrained in all areas. The tension was never off and the South Africans once again smashed out thanks to their weakness to show up in pressure matches. India just needed to win the game even more severely and set out to do just that. If this is the same India that shows up against Bangladesh, it will be hard to bet against them losing.