Veteran South African fast bowler Dale Steyn is all set to return to international cricket in the upcoming series against England which will be played from February 4. However, he hopes to play in the T20 World Cup later this year.

“I know I’ll be part of (the T20 series against England), that was the last conversation I’ve had,” Dale Steyn told cricket.com.au. “I get a nice two-week break, then straight into it again. I’ll be around for the ODIs – to be honest, I don’t know how much I’ll play (in the ODIs). I’ll be there for that and then definitely the T20s.”

“But I think it’s important to have that (experienced) figure around in the dressing room. KG (Rabada) is very young – to lead the attack at 24, and the next bowlers to come in are all younger than him, I think he needs somebody that’s there that is experienced, to look around and he knows he’s not there only one there,” he shared.

South Africa have gone through a tough phase in terms of administration in recent times. Even they had a rather forgetful ODI World Cup which Dale Steyn wasn’t featured due to injury.

“That is very much on my agenda,” said Steyn. “I’m starting to enjoy my cricket a lot more now, I think four overs is a lot easier on the body than the Test matches are.”

“So I’m putting my hand up for that and then I’ll wait and see how selections goes. After the MSL that we played, there were a lot of players that come out – some fantastic bowlers. But the old guys still seem to do the trick – AB (de Villiers) was there, Imran Tahir was taking wickets, I was up in the wickets. Maybe we will get the nod, maybe we don’t – but I’m putting my hand up,” Dale Steyn signed off. 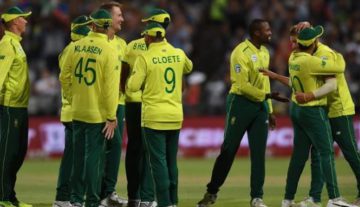