Former West Indies captain Darren Sammy recently expressed anger on his Instagram story when he got to know the meaning of the word “kalu”, that was allegedly used for him during his stint with SunRisers Hyderabad (SRH) in the Indian Premier League (IPL). Then in a video, which he shared on Instagram, he alleged that the racist slur was used by some of his own SRH teammates.

Now, fans have dug up some old social media posts – an Instagram post by Ishant Sharma where he calls Sammy “kalu” and a tweet by Sammy wishing VVS Laxman on his birthday in 2014, where he uses the word to refer to himself. Ishant in 2014 had uploaded a photo with Bhuvneshwar Kumar, Darren Sammy, and Dale Steyn. Captioning the picture, the lanky pacer had written, “Me, bhuvi, kaluu and gun sunrisers”.

Me, bhuvi, kaluu and gun sunrisers

“Happy birthday @VVSLaxman281 May God continue to bless you. #bestdresser oh remember dark kalu,” Sammy had written on his tweet in November 2014. this tweet indicates that Sammy might know the meaning of the word earlier itself.

However, Sammy did not accuse a particular person, but now the player has released a video, saying he will message all those who called him that word.

Ina video on his Instagram account, Sammy elaborated, “I have played all over the world and I have been loved by many people, I have embraced all dressing rooms where I have played, so I was listening to Hasan Minhaj as to how some of the people in his culture describe black people.”

He further added, “This does not apply to all people, so after I found out a meaning of a certain word, I had said I was angry on finding out the meaning and it was degrading, instantly I remembered when I played for SunRisers Hyderabad, I was being called exactly the same word which is degrading to us black people.”

So recently I discovered a word that I was being called was not what it actually meant I need some answers. So before I start calling out names I need these individuals to reach out and please tell me there’s another meaning to that word and when I was being called it,it was all in love. #blackandproud #blackandconfident #clarasboy #saynotoracism #stopracism #cricketer #stlucia

Sammy said that at the time when he was being called with the word, he didn’t know the meaning, and his team-mates used to laugh every time after calling him by that name.

Darren Sammy elaborated, “I will be messaging those people, you guys know who you are, every time I was called with that word, there was laughter at that moment, I thought teammates are laughing so it must be something funny. Now, I realize it was degrading, I will be texting you guys and I will ask you as to when you called me with that name, did you all mean it in any bad way or form? Let’s have a conversation, if it was in a bad way then I would be really disappointed.” 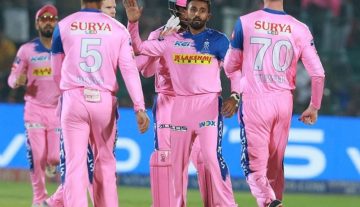