The Cricket Australia (CA) chairman, David Peever, whose work ethics were under scrutiny has resigned from his position as the head of Australian cricket. He repeatedly declared during CA cultural review press conferences on Monday that he had no intention to resign.

However, the reports have suggested that a  phone call from a state administrator on Thursday forced Peever to call it a day for his chairmanship. Earl Eddings has been appointed the interim chairman.

ALSO READ: Cricket Australia In No Mood Of Giving Exemptions To The Banned Players

According to the reports of the Herald Sun, Peever decided to submit his resignation to the board before a meeting of directors on Thursday afternoon. His decision to walk away was confirmed by CA and he tendered a resignation at the board meeting this afternoon.

It ends a turbulent period for Australian cricket where Australia’s reputation around the cricketing fraternity has gone down by a mile while on the commercial side, CA signed a record deal of $1.2 billion for the TV rights.

BREAKING There is black smoke coming out of Cricket Australia chimney. I understand a move was made this morning. Watch this space for an announcement on chairman’s future.

The long-term replacement for Peever can’t be guaranteed by now and may not necessarily Eddings, announced as the heir apparent last week at the AGM where the chairman was re-elected.

Last week, Peever and the CA board elected not to release the cultural review to their state association owners until after the AGM, a move that has been universally criticized. At the same time, he struggled considerably in publicly explaining the review, accepting responsibility for the cultural failings of the organization but also insisting he was the right man to take CA forward. 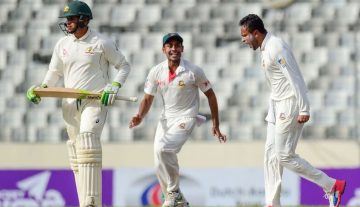