Disgraced Australian opener David Warner went through a tough phase in recent times in his cricketing career during the infamous ball-tampering scandal which hit the Australian cricket. He has been banned for a period of 12 months along with the then skipper Steve Smith by Cricket Australia (CA) and was also having a few personal problems at the same time. However, it seems that he has managed to leave all those incident behind as the southpaw has scored a stroke-filled century in his comeback knock in a practice T20 game.

Warner went on to amass 130 runs during his stay in the middle at Brisbane’s Allan Border Oval on Thursday against Australia National High-Performance Squad. He unleashed some of his trademark strokes including the reverse sweep as the spectators enjoyed his performances a lot. Warner smashed 18 sixes during his knock.

According to the reports in Mail Online, the audience was really impressed with his knock but they believed that the bowling attack was very ordinary. One of the fans after the game said, “I think he hit like 18 sixes… at least half a dozen went over the grandstand. ‘It looked like he had left the scandal behind and moved on… like he didn’t have a care in the world.”

After the game, David was also seen mingling with the players of the opposition giving them some necessary tips. He is all set to feature in the inaugural edition of Global T20 Canada which will commence on June 28. His blistering form is surely a good news for his franchise Winnipeg Hawks which will play the tournament under the leadership of Dwayne Bravo. He will play his first match on June 29 against Montreal Tigers and he will love to get on with the tournament soon.

Steve Smith will also feature in the same T20 league for the Toronto Nationals and will be part of the opening game of the season against Vancouver Knights. He will face his teammate Warner on July 2 and it will be interesting to see the way they fare in that game. 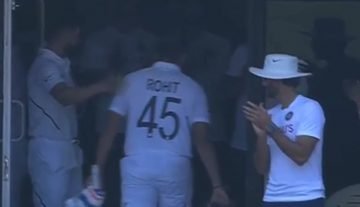 Uncategorized
By CricShots - Oct 3, 2019
WATCH – Virat Kohli Appluaded Rohit Sharma After Getting Out