The veteran Australian opener, David Warner has found a new way of keeping himself busy during the forced break due to the coronavirus pandemic as he has been seen doing some catching practice with his daughters in the living room. In a video clip uploaded on his Instagram page, Warner can be seen bowling to one of the daughters who gave some catching practice for her father. Warner’s daughter can be seen flat-batting a couple of deliveries and managed to match the aggression as her father.

However, Warner couldn’t manage to take a hat-trick of catches as his daughter top-edges the third delivery and the ball which falls well short of Warner. “When you’re locked up what do we do girls!! practice catching. #Family #Cricket #Fun,” Warner wrote as caption to the video. One of the replies Warner got to post came with a suggestion that he should have bowled a googly to get the hat-trick.

In another video shared by the Australian opener, he said he is jealous of his daughter’s ‘swing’ as she was smashing it like golf. However, during this forced break, he has been keeping himself busy playing some cricket along with golf and tennis.

Warner has been one of the most active cricketers on social media as he can be seen spending time with his family in the time away from the sport. He has been impersonating some popular Indian movie songs with his family during the lockdown.

During a recent chat with India Today, talking about his videos, Warner said, “We have to think out of the box. For me, it was about putting smiles on the people’s faces. Through TikTok, Twitter, and Instagram, my family and I have been able to do that. I will tell you one thing — I am glad I am a cricket player because those moves are incredibly fast and difficult and time-consuming. They are amazing at what they do.”

ALSO READ: Limited-over Series Between India And England To Be Postponed? 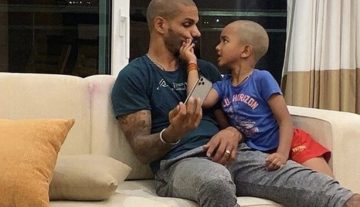 Social Shots
By CricShots - May 22, 2020
Shikhar Dhawan Compares His Childhood Picture With Zoravar