After reaching Sydney, suspended Australian cricketer David Warner faced media where he said that he will speak out all the things in a couple of days.

As a vice-captain of the Australian cricket team, David Warner was the mastermind of the ball-tampering scandal as he instructed the 25-years old Cameron Bancroft to conduct the ball-tampering during the third day of the Cape Town Test.

After the investigation, Cricket Australia (CA) has suspended Warner for one year from the international and domestic cricket. In the addition, he will never be able to lead the national side again.

Also read: IPL 2018: Analyzing The New Captains Of This Season

After his arrival at Sydney airport, he was asked whether he heard the head coach Darren Lehmann will resign from his role after the last Test in the four-match Test series against the hosts South Africa.

He replied, “As you can understand, it has been a tough, emotional time for my wife and kids. At the present time, you’ll hear from me in a couple of days. At the moment, my priority is to get these kids in bed, and rest up and get my mind a bit clear so I can think, and talk in a couple of days. Thanks guys.”

Leading the series by 2-1, the hosts will meet against Australia for the final Test at Johannesburg which will begin on Friday.

After receiving the suspension from CA, Warner posted in his official Instagram account, “To cricket fans in Australia and all over the world: I am currently on my way back to Sydney. Mistakes have been made which have damaged cricket. I apologise for my part and take responsibility for it. I understand the distress this has caused the sport and its fans. Its a stain on the game we all love and I have loved since I was a boy. I need to take a deep breath and spend time with my family, friends and trusted advisers. You will hear from me in a few days.”

Due to this scandal, Warner has lost the huge sponsorship deals along with Indian Premier League (IPL) contract too as he can’t take a part in IPL 2018. Initially, Warner was the captain of Sunrisers Hyderabad (SRH) for this season. Since 2015, he was leading that IPL franchise who had won the 2016 IPL crown under his captaincy. 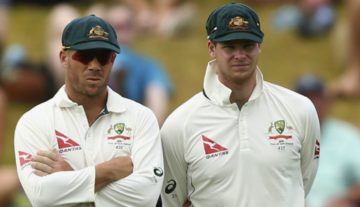 Article
By Shruti - Feb 20, 2020
“There’s no doubt we’re going to cop a bit of flak from the South African crowds”: Mitchell Marsh