The veteran Australian opener, David Warner didn’t have a memorable outing in the 14th edition of the Indian Premier League (IPL). Playing for the Sunrisers Hyderabad, he witnessed his worst season, both as a batsman and as a skipper. Hence, the SRH team management replaced him with Kane Williamson as the leader. At the time of postponement of the IPL, the Sunrisers kept languishing at the bottom of the table.

SRH’s lost their last game against the Rajasthan Royals (RR) on Sunday at the Arun Jaitley Stadium in New Delhi. For the time being, he is staying in a hotel even as the Australian cricketers are waiting for the travel restrictions to get over and visit their home. During his time in India, the 34-year-old is busy watching videos of popular songs. One of the songs was ‘Butta Bomma’.

Warner has been known for being a fan of Telugu songs and one of his videos on the public platform also hogged the limelight. It was during the time when the game of cricket came to a halt during the COVID-19 pandemic back in April 2020.

Here’s the screenshot of the video:

Earlier, Tom Moody, the Sunrisers director of cricket, said that David Warner was ‘shocked’ and ‘disappointed’ after being sacked as the skipper. Moody also put forth SRH’s plans into the future and also kept him out of the playing XI for the match against the Royals in New Delhi.

Moody said, “We had to make the hard call. He’s shocked and disappointed. He has come to terms with the logic behind what we want to achieve from a franchise’s perspective. He has rallied around the team and more importantly, the team has rallied around him. He (David Warner) is not going to be playing in this game and that’s purely a decision based on the combination.” 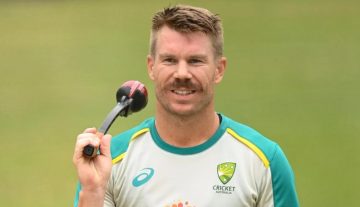