Exactly seven years ago, Kevin O’Brien scored his second ODI century during the 15th match of the ICC Cricket World Cup against England at Bengaluru. Andrew Strauss, the then English captain, had won the toss and chose to bat.

At the halfway stage, Ireland had lost half their side, with just 113 runs on the board. With 215 runs required off the next 25 overs and with five wickets in hand, the odds were against them big time. However, O’Brien had other plans.

He came in to bat at No. 6 in the 23rd over and ended up scoring 113 (63) with the help of 13 fours & six sixes as English bowlers just looked by. His sensational innings saw Ireland clinching an unimaginable victory with three wickets in hand and five balls to spare.

Watch the highlights of the match: 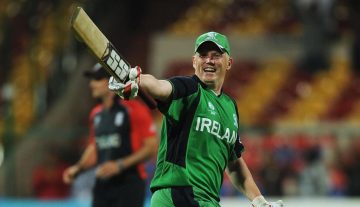