On Tuesday, Delhi District Cricket Association (DDCA) named the Gate 2 of the Feroz Shah Kotla stadium as the “Virender Sehwag” gate, but, with an error. The gate of was named Virender Sehwag but in the achievements column, DDCA referred to Sehwag as the “only Indian batsman to score a triple hundred in Test matches.”

Sehwag is the only Indian to score two triple centuries in Test cricket for India. He also later addressed the media and said that it was a great honor to have a gate named after him at the ground where he has played most of his cricket in younger days.

During a small function, Viru expressed his thoughts on the felicitation, he said, “It is a great honour and today we have a gate named after a cricketer but later we can have dressing room, stands and other things named after cricketers. It’s a good thing and positive move from DDCA. I had a wish that whenever such a function happens, we should call all the cricketers who have represented Delhi and India.” 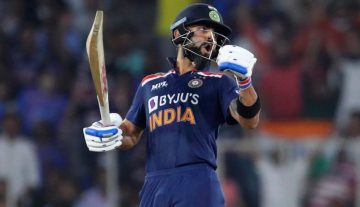 Stats Shots
By CricShots - Jan 18, 2022
Virat Kohli Will Be Aiming To Break The Record Of Dravid And Ganguly In ODI Series