Some players just seem to attract controversy wherever they go, be it intentionally or just a product of circumstances. After being in the headlines for an infamous ‘run-out’, the Indian all-rounder again produced a run-out at the non-striker’s end during the Asia Cup against Thailand with her brilliant throw.

India women made a strong comeback after a surprising loss to Pakistan in the Women’s Asia Cup, defeating Bangladesh emphatically, and are firmly on the front foot against Thailand as well. At one point, Thailand was reeling at 37/8 after 14 overs having been sent in to bat first, with Sneh Rana being the pick of the bowlers’ courtesy of brilliant figures of 4-0-9-3.

However, it was not a dismissal effected by bowlers that took the limelight during the encounter at Sylhet International Cricket Stadium. In the eighth over, Pooja Vastrakar was bowling to Sornnarin Tippoch with Nannapat Koncharoenkai at the non-striker’s end. Tippoch drove a fullish delivery straight to Deepti Sharma at the point and the action on the ball seemed to be all over.

But Deepti Sharma noticed that Nannapat was way too far out of her crease and decided to have a go at the non-striker’s end. Even though the batter realized she was outside her crease, she just turned her back and casually walked back towards the stumps, making no effort to save herself from the threat.

Deepti Sharma smashed a direct hit at the stumps, seemingly surprising Nannapat as the umpire signaled to the third umpire. Replays on the big screens showed Nannapat’s bat was still on the line as the ball struck the wicket, leading to a unique run-out through the hands of Deepti. 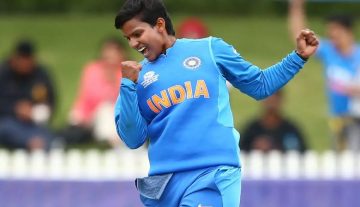