A couple of days after the English all-rounder, Chris Woakes pulled out of the second leg of Indian Premier League (IPL) 2021, Delhi Capitals (DC) have announced his replacement, the Australian fast bowler Ben Dwarshuis. The T20 league is set to resume from September 19 when Chennai Super Kings (CSK) and Mumbai Indians (MI) will be locking horns with each other at Dubai International Cricket Stadium.

Chris Woakes was part of the initial part of the IPL 2021 before it was suspended in the first week of May due to a coronavirus breach inside the various teams’ bio-bubbles. The English all-rounder played three matches and picked five wickets in them as DC surged to the top of the points table.

In a statement regarding the same, Delhi Capitals said, “Delhi Capitals today announced that English all-rounder Chris Woakes, who picked up 5 wickets in 3 matches in the first half of the VIVO IPL 2021, has pulled out of the tournament due to personal reasons. The Delhi Capitals have announced Australian fast bowler Ben Dwarshuis as Woakes’ replacement for the remainder of the IPL 2021 season.”

Ben Dwarshuis is ready to ROAR 🤩

Welcome to the DC family, Ben 💙

Ben Dwarshuis has scalped as many s 100 wickets in 82 T20s at an average of 23.73. He represents the Sydney Sixers in Big Bash League and is the sixth-highest wicket-taker in the history of the tournament with 85 wickets in 69 matches. Chris Woakes was part of the England Test squad for the five-match series against India which ended early last Friday when the fifth and final contest was canceled due to a coronavirus outbreak in the touring party’s camp.

Following that, three England cricketers including Woakes, Jonny Bairstow (Sunrisers Hyderabad), and Dawid Malan (Kings XI Punjab) – all three were part of the Test series – withdrew their names from the UAE leg of the IPL. 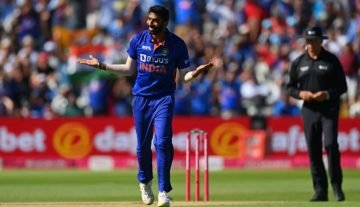 News
By CricShots - Oct 4, 2022
Sunil Gavaskar Feels No One Can Replaced Jasprit Bumrah In The Indian Squad