In the ongoing 14th match of the IPL 2022, Kolkata Knight Riders (KKR) and Mumbai Indians (MI) are locking horns with each other at MCA Stadium, Pune. During the eighth over, Dewald Brevis, who is also known as ‘Baby AB de Villiers’, made his mark on his debut by smashing Varun Chakravarthy a no-look six over deep mid-wicket.

After Shreyas Iyer won the toss, he asked MI to bat, and the five-time champions were off to a poor start as their skipper Rohit fell for three off 12 balls to Umesh Yadav. Dewald Brevis, the 18-year-old South African, walked in to bat at No. 3 on his debut in the tournament and announced his arrival in style.

On his first ball, Dewald Brevis smashed Pat Cummins’ short outside off stump delivery with a six over the wicket-keeper to end the Powerplay. Then, in the eighth over bowled by Varun Chakravarthy, he launched a no-look six. It was Chakravarthy’s first ball of the night, which he drifted into the pads. Brevis made no mistake in picking the delivery and smacked the ball over deep mid-wicket for a six. The fans in the stadium, as well as the others, were leapt in joy after watching the youngster play such an audacious shot.

Here is the video of the six from Dewald Brevis:

Here is how the fans reacted to the no-look six from Dewald Brevis:

Dewald Brevis showed why he is called #babyab with his 29(19) and also facing #umeshyadav #patcummins #Narine his no look six on Varun Chakaravarthy's First ball of the innings, this man looking promising and hope he keeps up the name #babyab #TATAIPL2022 #MIvsKKR #MumbaiIndians pic.twitter.com/EvIOl4tz2L

That No look six of Dewald Brevis shows the extreme talent he already possess. #MumbaiIndians #babyab

No look six by Dewald Brevis!!! What a debut, what a start to his career.#MIvsKKR #IPL2022 pic.twitter.com/tdBcgI07NI

Hard luck Dewald Brevis. That no look six on first ball off Varun, i won't forget 😍

A no look six by Dewald Brevis. He is in same position as AB Devilliers hit this. #MIvKKR pic.twitter.com/LtLfgOhaTh 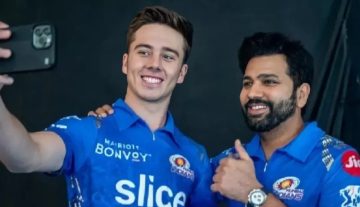