Rajasthan Royals (RR) duo Jos Buttler and Yuzvendra Chahal were seen learning some dance moves from the latter’s wife Dhanashree Verma on Monday, 30 May. Chahal and Buttler, who have been Rajasthan’s best players in this tournament, were on the losing side in the Indian Premier League (IPL) 2022 final to Gujarat Titans (GT) on Saturday, May 29.

While they came just short of winning the trophy, Jos Buttler and Chahal had incredible seasons on a personal level. Buttler won the orange cap, as he amassed as many as 863 runs in a season, the second-highest in the history of the entire tournament. On the other hand, Yuzvendra Chahal picked up 27 wickets to win the purple cap, and also registered a record under his belt by picking up the greatest number of wickets by a spinner in a single season.

The duo formed a stunning relationship in their first IPL campaign together where they were seen enjoying each other’s company.

In the video posted by Dhanashree Verma on her Instagram, Buttler, and Chahal can be seen trying to keep up with her dance moves. While Buttler tried to do his best, Chahal can be seen giving up very early and waiting for his wife to finish his steps. Both Chahal and Buttler formed the basis for Rajasthan’s success in the IPL 2022om, but they failed to take Rajasthan over the line.

Coming to the IPL 2022 final, RR after winning the toss, opted to have a bat first. However, some disciplined bowling from GT bowlers ensured that the Royals got restricted to a score of 130 runs in their 20 overs. Mohammed Shami, Dayal, Rashid, Hardik, and Sai Kishore were the wicket-takers for the new entrants. In reply, GT went on to chase the target easily with seven wickets in hand. 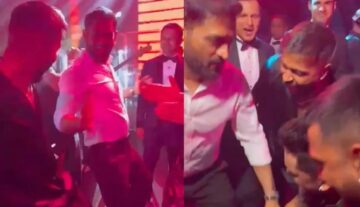