The Rajasthan Royals (RR) leg-spinner, Yuzvendra Chahal was one of the most vital cogs for the Royal Challengers Bangalore (RCB) but he was released by the franchise ahead of the Indian Premier League (IPL) 2022 auction and he was ultimately bought by RR for INR 6.5 crore in Mega Auction 2022. The bowler has been brilliant in the IPL 2022 so far for his new franchise and proved his mettle in the game against his former franchise on 05th April.

Yuzvendra Chahal was economical and took a couple of crucial wickets for his team and his wife Dhanashree Verma’s wild celebration is going viral now. Chahal became part of a new setup this year but that didn’t affect his performance at all. The leggie has been performing amazingly well and has scalped 7 wickets so far in three games.

ALSO READ: Rohit Sharma Opines Sachin Tendulkar Has Been His Inspiration Since Childhood

Yuzvendra Chahal is in the second position currently, as far as the ‘Purple Cap’ race is concerned. In his match against RCB, he picked up two important wickets for his team and his wife seemed to really enjoy his performance as Dhanashree Verma did  a wild celebration doing the rounds on the internet.

Here is the video of the celebration:

RCB skipper Faf du Plessis asked RR to bat first and they only managed to reach the score of 169. During the chase, the RCB openers made a brilliant opening partnership of 55 runs which they kept losing wickets. In the ninth over of RR inning, Chahal removed Virat Kohli and David Willey on back-to-back deliveries. His wife who was present in the stadium really enjoyed the wickets and Dhanashree Verma’s wild celebration has become the talk of the town now.

As for the match, RCB made a comeback in the game after losing half their side within 13 overs. Shahbaz Ahmed and Dinesh Karthik played match-winning knocks for their team, bailing their side out of trouble, and eventually won the match with 5 balls to spare. 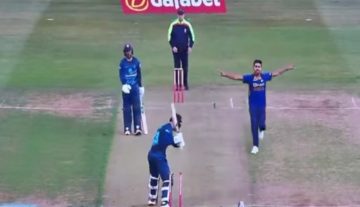