The veteran Indian wicket-keeper batsman, Dinesh Karthik said Virat Kohli and his men need a ‘power-hitter’ like Ishan Kishan at the top of the order in the shortest format of the game. Karthik was seen showering praises on the 22-year-old, who made a mark for himself on his debut in Ahmedabad on Sunday. India dropped Shikhar Dhawan suffering a loss by 8 wickets in the opening game and Ishan Kishan joined hands with KL Rahul on his T20I debut.

India was under a bit of pressure when they lost Rahul for a duck after playing maiden over in chase of a tricky target of 165. However, Ishan Kishan took the attack to the England bowlers as he played a dominating knock of 32-ball 56 while adding 94 runs for the second wicket with captain Virat Kohli. Ishan paced his innings with the maturity of a senior pro and showcased fearlessness with a calculated approach, as mentioned by his skipper.

ALSO READ: Pragyan Ojha Chased Down Pathan And Yuvraj For A Cake Fight

Ishan launched an attack at Tom Curran, and Adil Rashid as he hit 4 sixes and 5 boundaries. The young wicketkeeper was eventually dismissed at 56 after which Kohli took on the onus and helped India complete the run chase in just 17.5 overs.

Describing the same, during a chat with Sky Sports, Dinesh Karthik said, “Some brilliant shots. I just thought the way he started, the confidence, the poise, his ability to trust himself and play those big shots irrespective of the ball sets him apart. That’s what a power player is. You want somebody like that at the top of the order who can put pressure on the bowlers. He put pressure on Jofra from the first ball.”

Kohli was under a bit of pressure ahead of the 2nd T20I after registering back-to-back ducks but Kishan’s knock allowed the skipper to find his feet and get going. Virat found his form back as he took India past the finish line with some eye-catching wristy flicks. Karthik pointed out that having an explosive batsman like Kishan will suit Kohli’s game more in the T20s.

Karthik explained, “And also the key to Inda winning here is Kohli and a person like Kohli will revel batting with a person like Ishan Kishan.” 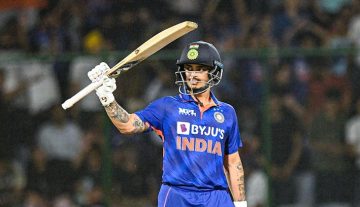