Dinesh Karthik was expected to lead Tamil Nadu in the domestic tournament, but due to his unavailability, Vijay Shankar will now be leading the team. Tamil Nadu will be locking horns with Maharashtra in the opening game of their tournament. The final of the league is scheduled to take place on November 24.

As per the quotes in Cricbuzz, Ramaswami said, “Karthik had played the IPL playoffs (for Kolkata Knight Riders) after taking injections. So, we have replaced him with Vijay Shankar as captain.”

Dinesh Karthik had a pretty dull outing in the IPL 2021 while playing for the two-time champions Kolkata Knight Riders (KKR). He only managed to score 223 runs from 15 innings at an average of 22.30 and a strike rate of 131.17. In the final on Friday KKR lost to the Chennai Super Kings by 27 runs at the Dubai International Cricket Stadium where Karthik scored just 9 runs.

Karthik last played international cricket back in 2019 during the World Cup semi-final against New Zealand. Thereafter, he never made it into the Indian squad. In 2021, Dinesh Karthik has also been seen weaving his magic in the commentary box and garnering praises from the greats of the game.

ALSO READ: Cricket Scotland Thanks 12-year Old For Designing The Their T20 Jersey

Meanwhile, Washington Sundar has also been ruled out of the upcoming edition of the SMAT. He recently missed the series against England and couldn’t take part for the Royal Challengers Bangalore in the IPL. Rahul Dravid, the head at the National Cricket Academy, has confirmed that the youngster needs a bit more time to reach his prime fitness.

Informing the same, Ramaswami said, “I have spoken to Rahul Dravid about Washi and he has told me that the player is still not ready. Rahul has advised us not to rush him and we are abiding by the suggestion.” 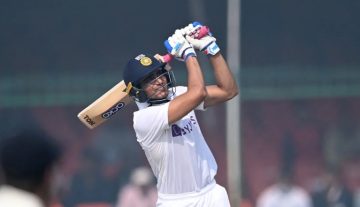