India’s wicketkeeper-batsman Dinesh Karthik, who on Sunday, handed his team a nail-biting four-wicket win over Bangladesh in the final of the Nidahas Trophy T20 tri-series with a six off the final ball. He revealed that he has been practicing these types of shots for a long time now.

Coming to the crease in the penultimate over with the scoreboard reading 133/5, Karthik announced turned the game upside down in the favor of men in blue in a matter of six balls. As soon as he arrived on the creased his smashed two sixes and a four in first three balls which narrowed the required run-rate for India the remaining 9 balls.

When the drama reached the final over, India needed 12 runs off 6 balls, but after the dismissal of the all-rounder Vijay Shankar, India needed five runs in the last ball. Kathik slammed a flat six over extra cover to clinch the game for his team.

Talking about those mind-boggling shots after the game, Dinesh said, “I have been practicing these shots – having a strong base and then hitting from there. Happy to be where I’m and thanks to the support staff who have kept on supporting me for the last few months.”

Chasing 167, the stand-in captain Rohit Sharma (56) once again led from the front with his classy knock but failed to finish off the proceedings for India. Middle-order batsman Manish Pandey (28) played sensible knock but was dismissed when he was needed the most. Then came Karthik who took India to victory.

Describing the feeling of winning the trophy, Karthik said, “Really happy to come out of this tournament. Wouldn’t have done justice to the tournament had we not won with the bunch of young guys in the team.”

Commenting on the match, Bangladesh captain Shakib Al Hasan said: “It hurts but we can learn a lot from this too. All credit to DK (Dinesh Karthik). We can take a lot of positives from this game and someday we can come out victorious.” 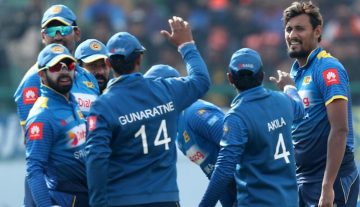