After dismissing the young debutant Indian wicketkeeper-batsman Rishabh Pant, English pacer Stuart Broad brought a nasty send-off for him on the second day of the third Test of five-match Test series between the hosts England and the visitors India at Trent Bridge (Nottingham).

Pant has made his Test debut after the experienced wicketkeeper-batsman Dinesh Karthik has been dropped for his poor performances in the first two Tests of the series. In the four innings of this Test series, Karthik scored two ducks, and 1 & 20 runs.

Meanwhile, Pant has made his Test debut for Indian cricket team at the age of just 20 years and 318 days and become the fifth youngest wicketkeeper-batsman to make a Test debut for India. However, Pant already made his international cricket debut before this Test as he has played four T20Is after making debut in February 2017. In his T20I career, Pant has scored a total of 73 runs (average 24.33) including the best knock 38 runs.

Coming to the Trent Bridge Test, Pant received the Test cap from the Indian skipper Virat Kohli on Saturday morning. England decided to field first after winning the toss in the Test match.

Pant came to bat on the opening day of the Test match after the skipper Kohli was dismissed on 97 runs and India was on 279/5. Facing only the second ball in his Test career, the left-handed batsman opened his Test account with a sixer to English leg-spinner Adil Rashid. At the end of the day one, while India was on 307/6, Pant was not out on 22 off 32 balls with two fours and one sixer.

However, the young batsman failed to play a long innings on Sunday, the day two of the third Test. Coming from the overnight score, Pant added only two more runs off 19 balls (24 runs off 51 balls) and was bowled by the English pacer Stuart Broad. Pant found an inside edge on a full outside off delivery that hit back stumps to end his first Test innings.

After his dismissal, Broad produced some words for him as a send-off. However, Pant remained non-reacted and walked towards the dressing room.

Here is that send-off video: 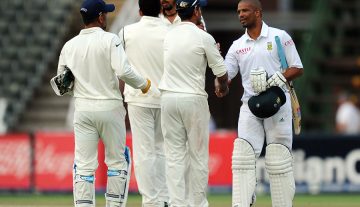