On Thursday, the English skipper Joe Root announced that hosts will be going with the same playing XI for the fifth and final Test against India at The Oval in London as they are having an unassailable lead of 3-1 over the visitors. He also confirmed that Jonny Bairstow will be getting back to his wicket-keeping responsibilities as he has recovered from his fractured middle finger injury.

Bairstow sustained the injury in the third Test at the Trent Bridge Test last month and played as a specialist batsman at The Rose Bowl. Jos Buttler kept wickets in place of Bairstow. During the pre-match press conference,  the English skipper said, “We are very fortunate to be in a position where we have two quality keepers. More than anything, they both want us to win games of cricket. Jonny’s been the Test keeper for a long time now and has done a fantastic job.”

Root also clarified that all-rounder Moeen Ali will continue to bat at No.3 ahead of him in the final Test of the series. Alastair Cook, England’s all-time leading scorer, on the other hand, will play his final Test before as he has decided to hang his boots from international cricket.

ALSO READ: Predicted XI Of India For The Oval Test

Cook will bring down the curtain on a 12-year international career by playing his 161st Test and 159th in a row. He had even made it clear that he has no intention of coming out of the retirement even for the Ashes.

For India, the playing XI is just a speculation with Prithvi Shaw and Hanuma Vihari expected to earn a slot in the list. 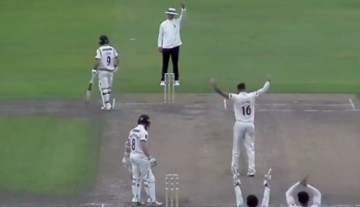 Videos
By CricShots - Jul 23, 2018
WATCH – Root, Williamson and Bairstow Dismissed On A Hat-trick