On the verge of the final moment of his cricketing career, Gautam Gambhir opens up about his interesting career. While he has enjoyed many moments in his career, he has also some disappointment in his career.

After announcing his retirement, the 37-year-old left-handed opening batsman recently had an interview with CricketNext where he answered some of the unknown questions regarding his career.

One of the successful Indian cricketers Gautam Gambhir claimed that he has enjoyed the entire journey while he would have been satisfied with even only international game too.

Gambhir told CricketNext, “I have enjoyed every bit of it. There were lot of ups and downs and that’s what makes you a better human being as well. I really enjoyed the entire journey.

“I would have been satisfied with even one international game because there are individuals who don’t even get to play one. I have got 147 opportunities (ODIs) to make my country proud, 58 Tests and so many T20s to do well. No regrets that I have done this with complete honesty and done my country proud in the process.”

Before winning the 2011 ICC Cricket World Cup, Gambhir was an important member for the Indian cricket team to win the 2007 ICC World T20 in South Africa, the inaugural edition of the tournament. In the final of that tournament against Pakistan, Gambhir played the highest knock in that game by scoring 75 runs while MS Dhoni-leading the Indian cricket team won by 5 runs.

Talking about winning the World T20, Gambhir said, “T20 World Cup was something I wasn’t aware of growing up. 50-over World Cup was what everyone knew. Before the T20 World Cup, I didn’t play in any World Cup and counted myself lucky to be picked for an event that was happening for the first time. I started with a duck against Pakistan and then ended up as the part of a winning team and became the second-highest run-getter.”

However, despite being an important part of winning the 2007 ICC World T20 or 2007/08 Ranji Trophy, Gambhir claimed that 2007 was one of his lowest parts of his career too due to missing the early 2007 ICC Cricket World Cup in West Indies. In that WC, India had a disastrous experience as they were eliminated from the group stages.

Gambhir said, “2007 was also probably one of my lowest moments in my career because I missed out on a place in the 50-over World Cup side to the West Indies. Even now sitting here, I feel I should have been part of that World Cup, I was so close to getting selected. I thought that my childhood dream will never come true, because till that time the T20 World Cup was not conceived. I remember it was in February, I missed out on making the squad and I didn’t pick up the bat for two months.

Gambhir played a very crucial knock during the 2011 ICC World Cup final against Sri Lanka that India won by six wickets. Chasing down the 275 runs to win, Indian cricket team lost the opener Virender Sehwag and the no.3 in-form batsman Sachin Tendulkar in the early stage. In that such pressure situation, the left-handed batsman scored 97 runs off 122 balls. Though he just missed his deserving century after getting bowled by Thisara Perera, his knock already put the Indian team into the comfort zone and the skipper MS Dhoni successfully completed the finishing job with Yuvraj Singh.

Talking about that final knock, Gambhir said, “When I had to go into bat, I didn’t even realise when I was in. Off the second ball, Viru (Virender Sehwag) got out and took a referral and by the time I realised what was happening, I was already standing in the middle, not thinking anything. Had I got the opportunity to think or openers played 10-15 overs, the occasion could have got the better of me. The innings got over, I was just getting seated with my pads and I was out in the middle and facing Lasith Malinga off my first ball. When you are in the middle, you only think of what is coming next towards you and tackle that.”

Gambhir is hugely known as an angry man who hardly smiles on the field. He had some famous hot confrontations during his international career, especially with the Australian and Pakistan side. Even he had some confrontations with Virat Kohli during IPL careers. Speaking on that, Gambhir revealed that there was nothing personal.

Talking about that, the 37-year-old said, “I had to fight for every inch in my career since I was a 12-year-old boy and till date. Nothing came easy to me. So that is what made me, what you can call a street-fighter. You don’t take things lightly. There were so many times people said I don’t smile on the field but I couldn’t afford to smile and couldn’t let my guard down. I couldn’t relax on the cricket field.

“Sitting here right now, one thing I could have done was let my guard down a little bit, enjoyed a little bit, smiled a little bit but all that passion to win took over me. All the confrontations that I have had on the field, it was not personal but it was for my team and a winning a game of cricket for them.”

On the other hand, Gambhir also spoke about his relationship with MS Dhoni in another interview to NBT where he claimed that he has no rift with the former Indian captain.

Gambhir is also famous as a successful captain in IPL history. Under his captaincy, Kolkata Knight Riders (KKR) won the trophy twice in 2012 and 2014 editions. Talking about IPL, Gambhir claimed that the tournament taught him how to be a leader and also revealed that Anil Kumble was a perfect leadership role model for him.

The former KKR skipper said, “IPL taught me how to be a leader. I have played under a lot of captains but I have played under very few leaders. One of those was Anil Kumble. He was the best captain that I had for a very long time. He didn’t captain India for a very long time, whatever little I played under his captaincy I knew that India missed out on a leader who could have taken India to a different level. He taught me things how to become a leader and a perfect role model for me.”

The 37-year-old also revealed his biggest regret from his career and that is – not winning any big Test series abroad. Though he played a crucial role for the Indian cricket team to win the Test series on the New Zealand soil, he disappointed to not win any Test series in England or Australia.

Gambhir commented on his biggest disappointment, “My biggest disappointment was not to win Test series abroad. I was part of great series win in New Zealand. Test cricket is the pinnacle of cricket, not the IPL or T20 cricket. Another special win was in South Africa but the lowest point was when we got thrashed 4-0 in England when we were the No. 1 side in the world. Went to Australia the same and against got thrashed, so those two were my lowest moments.” 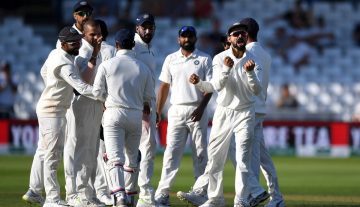 News
By Sandy - Oct 9, 2018
Virat Kohli and other Indian cricketers can be rested before the 2019 World Cup