Erin Holland, who is currently plying her trade as a presenter in the ongoing season of the Pakistan Super League (PSL) presenter, gave an adorable birthday surprise to her husband Ben Cutting on his birthday on Sunday during the match between Peshawar Zalmi and Islamabad United.

Australian all-rounder Ben Cutting, who is playing for Peshawar Zalmi, was wished ”Happy Birthday” by his wife Erin Holland. During the recently-concluded clash between Peshawar Zalmi and Islamabad United, the video on the official Twitter handle of the Pakistan Super League (PSL) showed Erin talking to her husband Ben Cutting.

Alex Hales (57 off 25 balls) and Paul Sterling (82 off 54 balls) lead Islamabad United to a nine-wicket victory over Peshawar Zalmi in the fifth match of PSL 2022. Zalmi posted the score of 168/6 in their quota of overs which United chased down with 25 balls to spare and 9 wickets in hand.

Earlier in the game, Sherfane Rutherford played an unbeaten knock of 46-ball 70 for Peshawar Zalmi, whereas Hasan Ali and Faheem Ashraf took a couple of wickets each for United. During the chase, 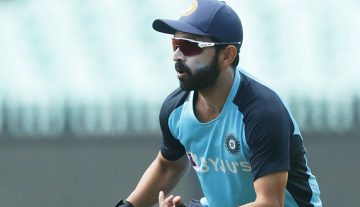