The two-time champions Kolkata Knight Riders (KKR) suffered a loss 2-run loss over new entrants Lucknow Super Giants (LSG) in the 66th match of the Indian Premier League (IPL) 2022 at the Dr. DY Patil Sports Academy in Mumbai on May 18 (Wednesday). With the loss, KRK has been eliminated from the race of qualifying for the IPL 2022 playoffs and a lot of credit for LSG’s win goes to Marcus Stonis and Evin Lewis.

Earlier in the game, after winning the toss, LSG opted to bat first. KL Rahul and Quinton de Kock demolished the opposition providing a dream start to the team and LSG posted a total of 210/0 in the first innings. De Kock scored a fiery ton as he played an unbeaten knock for 140 runs from 70 balls. Rahul played a supportive knock of 68 runs from 51 balls.

Chasing such a humongous target of 211 runs, KKR batters showed positive intent from the start. Nitish Rana scored 42 runs while Shreyas Iyer amassed 50 runs in his knock. Both of them gave momentum to the team and Sam Billings also played an aggressive knock. KKR managed to keep themselves in the game as they were requiring 21 off the final over with Rinku Singh and Sunil Narine in the middle.

Marcus Stoinis came out to bowl the last over for LSG and he conceded a four and a couple of sixes off the first three balls. However, Stoinis held his nerve as he managed to get the wicket of Rinku Singh owing to a brilliant diving catch of Evin Lewis.

KKR was requiring 3 runs to win on the last ball with Umesh Yadav at the strike, Marcus Stoinis managed to keep his calm and executed a perfect yorker to uproot the off stump and eventually took his team over the line.

Here is the video of the catch by Evin Lewis: 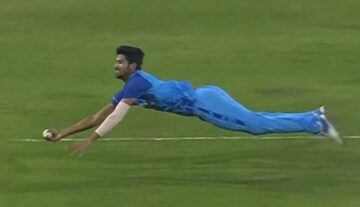