The Indian batsmen have had some dismal performances in the recently concluded two-match Test series in New Zealand where the visitors suffered a whitewash. The veteran Indian batsman, Ajinkya Rahane struggled too, managing 91 runs across four innings.

However, it wasn’t the number of runs Rahane scored during the series that highlighted his struggles but the manner in which he approached his batting. Either he was being too cautious or ultra-aggressive, which can happen because of the ‘fear of failure’.

Former India captain, Dilip Vengsarkar pointed out some serious flaws in Rahane’s batting.  As per the quotes in Times of India, he said, “He’s making an extra movement with his hands while batting. He’s moving his bat too much in his backlift. He’s a fraction of a second late on to the ball. It explains why his head isn’t still when the ball is delivered.”

New Zealand fast bowlers frustrated the Indian batsmen with consistent bouncers. Rahane, in the second innings of the second Test, decided to counterattack which led to his downfall. On the other hand, his cautious approach was also reflected during a Ranji Trophy match this season when he struggled his way to 8 off 54 before being dismissed.

Another former India cricketer, Sandeep Patil feels the Mumbaikar, who averages 42.88 in Test cricket now, is trying his best to prove he’s a Test specialist having lost his place in India’s limited-overs teams.

Talking about Rahane, Patil said, “I heard about this (batting slowly) when he was playing for Mumbai this season. He has led India, he’s got a tremendous overseas record, but all that’s history. Now that he’s been labeled only as a Test player, been out of India’s limited-overs team. He’s trying to prove a point. However, when you’ve so many hundreds behind you, this approach is not acceptable. An ordinary player like me survived on foreign soil, these players are champions.” 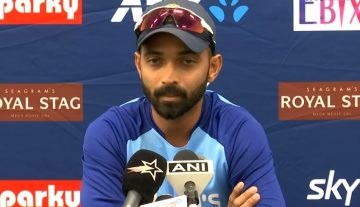 Article
By Shruti - Mar 12, 2020
Ajinkya Rahane Has a Say on Indian Players