Afghanistan’s young leg-spinner Rashid Khan has gathered a lot of limelight in recent times. The 18-year old lad has been underestimated a lot of times by the oppositions and he knows how to take it as an advantage. In a very short career span, he has become the crucial cog for his team, especially in the shortest format of the game. Even in the Desert T20 league, he helped his team to clinch the title.

Rashid idolizes Pakistan legend Shahid Afridi as a bowler and Indian skipper Virat Kohli when it comes to batting. He was also the second highest wicket taker in the World T20 2016 even after bowling against the giants of international cricket.

In February, Rashid became the only the second player from Afghanistan to grab an IPL contract as he was bought by Sunrisers Hyderabad for a huge sum of Rs. 4 crores. Here are some interesting facts about the youngster.

Rashid purely belongs to Afghanistan as he was born and brought up in Nangarhar, one of the smallest provinces in Afghanistan. He always had something special in him as he was picked at the age of 17 for the national squad. He stepped up to each and every opportunity he was given in his career so far.

The flamboyant spinner became the youngest Afghanistan player to play in a Twetnty20 International as he was just 17 years and 36 days old. Later on, he made his One Day International debut as well.

Rashid was also the highest wicket-taker for the U19 side at the 50 over World Cup in 2016 as he bagged 10 wickets in 6 matches in that tournament.

The 18-year old leggie has always loved to perform in big games. He has the ability to hold his nerves and perform for his team in crunch situations. Recently, in the Desert T20 league, he bagged 9 wickets in 5 matches. Even in the 2016 World T20, his spell of 3/11 against Zimbabwe helped his team to win the game.

Rashid Khan registered his name into the history books hen he grabbed the IPL contract worth INR 4 crore from the Sunrisers Hyderabad along with his fellow countryman Mohammad Nabi. He has got the chance to play with the greats like Yuvraj Singh and David Warner. He will also get the opportunity to bowl against his idol Virat Kohli in the 10th season of IPL. 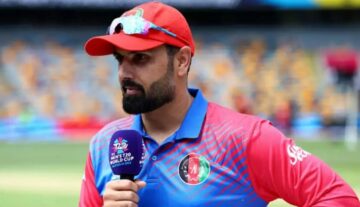