Currently, the former India skipper, MS Dhoni has been in Mumbai for some commercial shoots and that is where Bollywood actor Akshay Kumar dropped in to meet the star cricketer. The two stars from their respective field seemed comfortable in each others company. Dhoni was seated in front of a mirror, whereas Akshay was standing behind him in the picture.

Arun Pandey, Dhoni’s manager was also present and in the picture shown, Akshay kept his hands on Dhoni. Which gave the best testimony of the chemistry they share with each other. Rhiti Sports, who manages former Indian skipper posted the picture of the two stars together along with some other pictures as well in which the flamboyant all-rounder, Hardik Pandya was also present and fans cannot keep a lid over their emotions.

Here is how fans reacted:

For others This Is Just A pic , For Me It's 2 God's In A Single Frame @akshaykumar @msdhoni Love You Both 😘😍 pic.twitter.com/OFa63kwg13

Pic Of The Decade : @akshaykumar Sir With @msdhoni
Too Much Dedication , Hardwork , Simplicity , Awesomeness , Punctuality And So Many Things Together In A Single Frame 🔥
Both Fav's Together And There Can't Be More Happiness Than This 🙏 pic.twitter.com/ZcaKLZkKfV

Latest 😍😍@akshaykumar @msdhoni
Both are my idols pic.twitter.com/Ny8tIaIiNL

@akshaykumar & @msdhoni in Single Frame 😍Both Of My Idol pic.twitter.com/EQ2b1rLd7g

Meanwhile, Dhoni is expected to play a crucial role for the Indian team in the upcoming ICC World Cup which is scheduled to commence on May 30. He has been in good form throughout the IPL season and fans would be hopeful that he comes good in the World Cup. The men in blue will be locking horns with South Africa on June 5.

Recently, the Indian skipper,  Virat Kohli, and head coach Ravi Shastri have often given credited the tactical and physical value that former Indian skipper, MS Dhoni brings to the World Cup-bound team, with Shastri pointing out that MS’ has been quite instrumental in his leadership from behind the stumps. Having worked closely with Dhoni, Kohli expressed for Dhoni, the team has always been above everything else. 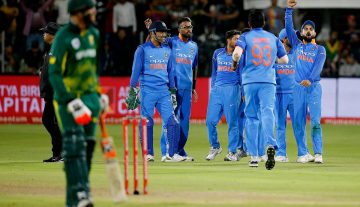