During the game against St. Kitts and Nevis Patriots, Guyana Amazon Warriors fast, bowler Odean Smith managed to break the bat of the self-proclaimed Universe Boss, Chris Gayle into two pieces on the second ball of the third over of the second innings. Gayle, who plays for St. Kitts and Nevis Patriots, managed to register the score of 42 runs from 27 balls with five boundaries and three sixes to lead the Patriots to a seven-wicket victory.

The Caribbean Premier League is all set to witness the final of the season on Wednesday, September 15. St. Kitts and Nevis Patriots won the second semi-final match on September 14. The Patriots with crucial contributions from Chris Gayle and Evin Lewis clinched a seven-wicket win over Guyana Amazon Warriors in the crucial knock-out game.

However, during the qualifier, there was a hilarious incident when Chris Gayle was batting at the crease. Having scored just one run off eight balls, it was clear that a Gaylestorm would be hitting the match anytime soon. After getting his first boundary of the match by whacking a full toss through the covers, Chris Gayle was finally ready to unleash.

However, on the very next ball, Chris Gayle again tried to find the same spot on the field but this time his bat could not handle the brute force. The bat came apart cleanly at the handle as Gayle just stood and watched on. The fire pe of Oden Smith turned out to be hard enough to break the bat.

Chris Gayle ended up scoring 42 runs off 27 balls with five boundaries and three sixes and stitched up a 76-run partnership with Evin Lewis. St. Kitts and Nevis Patriots eventually won the game by using down the target of 179 runs with 7 wickets in hand. 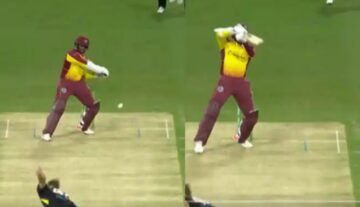