In the 1980s, when Australian cricket team was at their pinnacle, their batting line-up was one of the crucial reasons for their success. The team was led by Kim Hughes, the support of the Baggy Greens batting lineup was none other than the legendary Allan Border.

During those days, a tour to Pakistan did not raise security concerns and in 1982 Australia visited the subcontinent to be part of a record they would not enjoy. On this day, in Hyderabad in Sind (Pakistan), Jalal-ud-Din, a fast-medium bowler created a havoc for the visiting Aussies in a tight run-chase.

Jalal-ud-Din removed Rod Marsh, Bruce Yardley, and Geoff Lawson on three successive deliveries of his seventh over to register what was the first ever hat-trick in the limited overs format.

Australia took a huge lesson from the tour and used the experience to the 1987 World Cup in 1987 in the subcontinent.

But, Jalal-ud-Din played his last Test match in 1985 against Sri Lanka, and his last ODI against arch-rivals India in 1983. He finished his career with a total of 25 international wickets and over 250 first-class wickets. 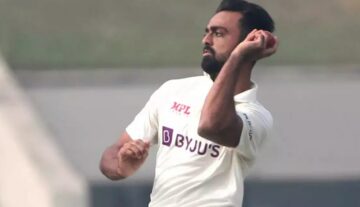 News
By CricShots - Jan 3, 2023
Jaydev Unadkat Takes A Hat-trick In First Over After Ranji Return