During the fifth ODI of Australia’s tour of India in 2001 at Margao, even a Sourav Ganguly master-class could not save India from the brinks of a four-wicket loss and eventually a series loss.

Having lost the last ODI at Visakhapatnam by 93 runs, Sourav Ganguly, the then Indian captain, won the toss and elected to bat. India lost Sachin Tendulkar (12) in the fourth over to Nathan Bracken. But that did not affect Ganguly, who played his shots from the word go.

Ganguly was joined by VVS Laxman and the duo added 105 runs for the second wicket. Ganguly ended up scoring 74 (83) with the help of nine fours and two sixes. On the other hand, Laxman went on to score his maiden ODI century, 101 (107), with the help of 10 fours. With bowling figures of 10-1-49-2, Ian Harvey was the pick of the Australian bowlers.

Half-centuries from Adam Gilchrist (76) and Michael Bevan (87*) aided Australia to win the match and the series 3-2. For India, Tendulkar and Javagal Srinath had picked up three wickets each.

Watch the video of Ganguly’s innings: 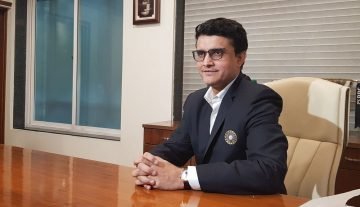