Finally, Windies has got some good news as their stalwarts Chris Gayle and Marlon Samuels makes a comeback into the ODI squad for next month’s series against England.

Gayle played his last ODI match in the 2015 World Cup, while Samuels has been absent for a year because of a dispute with the board. Both of them are also not a part of the Test squad which recently faced a huge defeat of 209 runs against England at Edgbaston last week.

In a recent statement, CWI’s head of selection committee, Courtney Browne said, “The panel welcomes back Chris Gayle and Marlon Samuels, who will both add value to our batting and help with the nurturing of the young batsmen in the team. Both Sunil Narine and Darren Bravo have declined to be considered for ODIs in England.”

He further added, “Narine has however confirmed his desire to play 50-over cricket again but has asked to play in our Regional Super 50 before he is considered and Darren said he was not available for selection. Dwayne Bravo said he is still not 100 percent fit but is looking at a possible return to international cricket next year.”

In ODIS, Gayle has amassed 9,221 runs in 269 games for the Windies while Samuels has scored 5,180 in 187matches. The pair also shares the record for the highest partnership of 372 runs in ODIs against Zimbabwe in Canberra during the last World Cup.

Last year, Samuels was dropped for deciding to play in the Pakistan Super League rather than the Caribbean’s Super 50 competition. 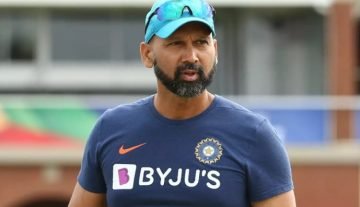 News
By CricShots - Jan 24, 2023
Paras Mhambrey Reveals The Hardwork Of Mohammed Siraj In The Nets