The Indian wicket-keeper batsman KL Rahul has been going through a purple patch in his career as he had a phenomenal outing in the IPL 2020. As a result of his performances, he earned a place in all three squads for the Australia Tour. He was the highest run-scorer in the Indian Premier League (IPL) by amassing 670 runs in 14 matches. His KXIP team-mate Glenn Maxwell will now be up against him in the T20 series between India and Australia starting in exactly a week’s time.

Maxwell showered praises on KL Rahul for the kind of form he is in, and said that the player has a great temperament and can stay calm in pressure situations. As per the quotes in cricket.com.au, Maxwell said, “He was a gun [in the IPL]. We [Australia] had a team meeting the other day and they came to me and asked how I thought we should get Rahul out, and one of the things I said was to try and run him out.”

He further added, “So I think that’s what we’re going to try and do the whole way through the series, try and run him out and hope for the best. He’s a great performer got a great temperament, great head on his shoulders, and is extremely calm in pressure situations.”

Glenn Maxwell also went on to acknowledge that he has had a frustrating IPL season and said that he now looked forward to the long Australian summer ahead.

Maxwell further elaborated, “I was hitting the ball fine [in the IPL], I just wasn’t getting much of a crack but that can happen. I’m now looking at the bigger picture and understanding my role in the Australian side, trying to put the IPL aside and thinking about what I need to do to get ready for every game.”

The veteran Aussie all-rounder scored only 108 runs in 13 matches at an average of 15, as his team failed to make it to the play-off stages. 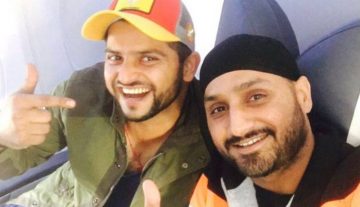 Social Shots
By CricShots - Aug 1, 2020
Harbhajan Singh Seems To Be Missing Suresh Raina During The Break