Currently, Team India is in New Zealand for the two-match Test series, as part of the ICC Test Championship. After having lost the first Test in Wellington by a comprehensive margin of 10 wickets, Virat Kohli and his men will be looking to make a strong comeback and not only claim 60 valuable points but also assume parity in the series.

This is the last Test series for Team India until November 2020, when they will be locking horns with Tim Paine-led Australia for the Border-Gavaskar Trophy. The last time the Men in Blue were in Australia, they became the first Asian team to win a Test series in Down Under [2-1].

The Indian team will hope for an encore but the task will be a lot more difficult considering they will be up against the full-fledged Australian team. In the last tour, Australia missed their superstar duo of David Warner and Steven Smith, feels former Australian fast bowler Glenn McGrath.

As per the quotes in Indian Express, Mcgrath said, “Australia is playing good cricket. Steve Smith and David Warner — both are playing well and we saw what Warner is capable of in the Australian summer. Having a batsman like Warner back, and a quality batsman like Steve Smith, it’s a totally different game.”

McGrath reckons that while it will be tougher for India, that is not to say that they will not do well there, considering they have the confidence of winning Down Under in the past.

Talking about the same, the veteran seamer said, “It’s gonna be tougher for India. That’s not to say they can’t perform well. They have got the confidence of playing in Australian conditions now and they know how to do it. They’ve done it and they’ve been successful. So, there’s still enough positives there I think it’s going to be a really good series for sure.”

Australia and India will also play a Day/Night Test during the four-match series, adding an extra dimension to what already promises to be an enthralling series. 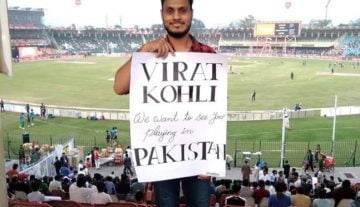 Twitter Reaction
By CricShots - Oct 10, 2019
Twitterati Erupts As A Virat Kohli Fan Askes Him To Play In Pakistan