Former South African skipper, Graeme Smith has turned down his interest in becoming Cricket South Africa’s (CSA) director of cricket. In a statement issued on his Twitter feed on Thursday, Smith said he wasn’t confident that he would have been given the freedom to do the job on his own terms.

Smith confirmed that he had been interviewed for the position by CSA that would effectively have put him in charge of the national team, who have endured a miserable set of results since losing a home Test series against Sri Lanka in February.

Talking about the same, Smith said, “I would love to have taken on the role. However, despite my obvious desire to make a difference, during the long and, at times, frustrating process over the last 10 or so weeks of discussions, I have not developed the necessary confidence that I would be given the level of freedom and support to initiate the required changes.”

The team director will report to the director of cricket, who will be reporting to the chief executive Thabang Moroe. The relatively inexperienced Enoch Nkwe was appointed interim team director for a tour of India in which South Africa lost all three Tests by wide margins last month.

Please see my statement below on the Director of Cricket role for Cricket South Africa pic.twitter.com/uuv4kjIF3j

However, some of the media reports indicate that Van Zyl remains a contender for the full-time position. Smith concluded his statement by saying his passion for South Africa’s cricketing fortunes remained steadfast.

Wishing the new director, Smith said, “I give my heartfelt best wishes to whoever does take the role on. I will continue to support the teams and give my advice and guidance whenever I can.”

News that Smith was in line for the director role gave rise to hope that he might have been able to transform South African cricket as Rassie Erasmus did with the country’s rugby Springboks, who recently won the Rugby World Cup. Erasmus appeared to have been the freedom to run the team without political or administrative interference. 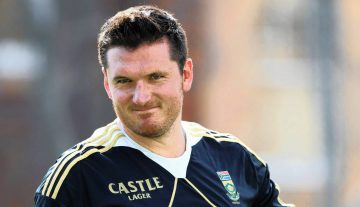