Team India have failed to qualify for the semi-final in the ongoing T20 World Cup 2021. They had started with two consecutive defeats against Pakistan and New Zealand. Although they bounced back and won the last three matches, it didn’t help them qualify for the semi-final as well. And, former England spinner Graeme Swann said that they need to improve the seam department.

He also said that there were many pace bowlers who did well in the recently concluded IPL. They even performed better than the ones India chose for their T20 World Cup squad. While speaking on Cricket.com’s YouTube channel about what changes he wants to see in the Indian squad from this World Cup to the next, Swann shared his views.

He said: “I think in the seam bowling department, there are options who could come in. You’ve got the IPL, where you’ve got the greatest showcase for Indian seam bowlers there and I think there are people who were not involved in this World Cup who have outperformed those who are involved.”

He continued: “Of course, not Bumrah. Bumrah has got to play every game. Bumrah is brilliant. Especially in Australia, where the wickets are harder and the ball is going to go through, Jasprit is the first name on the team sheet. But as opposed to the other seamers, and I’m not just jumping on the bandwagon and having a go at Shami, because I think Shami does a good job. But I just think there are other seamers who have been incredible in the IPL.

However, he named the young pace bowler Chetan Sakariya and IPL 2021 Purple Cap winner Harshal Patel who can be potential options for the future as well.

“You’ve got some great left-arm talent, mainly at Rajasthan. Harshal Patel. I think, Scotty Styris used to deride him that he gets lucky and gets wickets at the death, but he gets wickets. The fact that he gets wickets and he wins matches, I think if you put him alongside Jasprit Bumrah at the other end, along with the spin options in (Ravindra) Jadeja and (Ravichandran) Ashwin and (Varun) Chakravarthy, you’ve got a brilliant team,” Swann said.

Meanwhile, veteran off-spinner Ravichandran Ashwin returned to the white-ball comeback after playing his last T20I in 2017. While he was asked if Ashwin would get further opportunities in the shortest format of the game, Swann said that he should get the chance as well. However, Ashwin played in the final three matches, picking up six wickets. as well.

He added: “Ashwin should be in every team that India pick. His fielding is an issue these days. He’s slow and he’s dropped a few catches, but his bowling makes up for it. It really does. And I believe you’ve not got a lot of time left for a lot of players and you’ve got to use these players in the prime of their careers.”

“Because age catches up very quickly to these players and sooner or later, he won’t be able to perform at the same level and have as much of an impact. So you get the impact out of these players when you can and I’d be playing him every game,” concluded Graeme Swann. 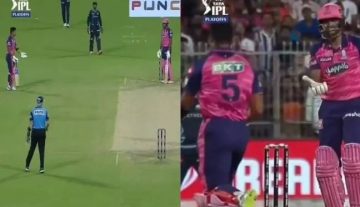 Fantasy Tips
By CricShots - May 25, 2022
Riyan Parag Got Run-out After Being Ignored By R Ashwin