While the Indian left-arm chinaman Kuldeep Yadav is threatening continuously the English batsmen on their home soil, England’s limited-overs batting coach Graham Thorpe has claimed that the English batsmen are picking the young Indian bowler but still need more improvement.

After performing greatly in the T20I series, Yadav bagged six wickets (6/25) on Thursday in the first ODI of three-match ODI series against England at Trent Bridge (Nottingham) that led the team to clinch an easy dominating victory. English batsmen totally surrendered in front of Yadav who was very disciplined with the ball in hands.

Talking about the main challenge they are facing against Yadav, Thorpe said, “From what I’m hearing with my chats with them [the batsmen], it’s not like they can’t pick him — so for me, that’s important. It’s about looking at it logically and then working out a method of playing him. It’s more of the mental side. Also about being proactive with our movements at the crease against him so if you don’t pick him, you’re still in a good position to play him.”

Thorpe believes the English batsmen are improving well against Yadav as the players are sharing their experiences in the dressing room.

The former English cricket said, “We responded well in the 20-over game and we’ve got to respond well in the 50-over games. It’s important not to over panic. Our guys who have spent time at the crease against him have come back and said this is happening and that’s happening. You do need to manoeuvre the ball around. And also having the ability to play the bigger shots against him.”

The 48-year-old has also elaborated the method how to face the wrist-spinner.

Thorpe said, “Maybe we handed it a little bit to him. He got three wickets in 11 balls, his tail is then up. Once you build up a position when he’s [been] kept out of the game a little bit longer, he feels under pressure to take wickets.

“The one thing about him playing is that you start to formulate plans. The more you face the trajectory, the flight, the speed of the ball, they’re the things you pick up on. You’ve also got to set-up as player against it; your method, your footwork, your position on the crease.

“You have to react quite quickly, especially in one-day cricket when you’re always looking for opportunities to score. He shut us down and you have to give him credit. It’s up to us and our players to keep an open mind, accept it’s happened but we’ve got to turn it around pretty quick as we are playing again on Saturday.” 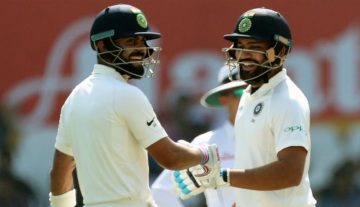