Greg Chappell can be termed as one of the great batsmen to have ever played the game of cricket, but his coaching skills have often been criticized. During his tenure with the Indian team, the former Australian skipper was questioned for his behavior as a coach. However, his stint had a few positives. One of them would be the emergence of MS Dhoni at the world stage.

In an interview, Greg recalled the time he had seen Dhoni bat for the first time. He revealed that he was quite impressed with his batting skills and his power-hitting abilities. Chappell credited Dhoni as the most powerful batsman ever he has ever seen.

During a Facebook live chat with Playwrite Foundation, Chappell said, “I vividly remember that I was left awestruck when I saw him batting for the first time. He was definitely the most exciting cricketer in India at that time. Dhoni used to hit the ball from the most unusual positions. He is the most powerful batsman I have ever seen.”

The Aussie even recalled the innings of 183 in 2005 by the former Indian skipper. He shared the story about how he instructed the Dhoni to control his game as per the situation in the next game in Pune. He revealed how in the next match, the Ranchi cricketer changed his game to play a more controlled knock.

Chappell explained, “I remember his knock of 183 against Sri Lanka and how he tore them apart. It was power hitting at its very best. The next match was in Pune. I asked MS, ‘why don’t you play along the ground more instead of trying to hit every ball to the boundary’. We still needed 20 runs to win and Dhoni asked me, through 12th man RP Singh if he could hit sixes. IWhen we needed six runs to win, he finished the game with a six.”

The former coach also revealed that he would present challenges in front of the wicket-keeper batsman to take his side home to a win. Chappell revealed that the happiness of finishing a match was always visible on Dhoni’s face. He also credited the veteran as the best finisher to have ever played cricket. 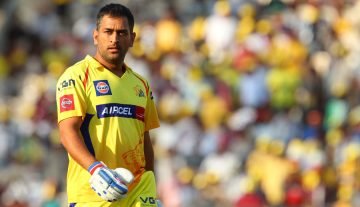