The fake IPL of Molipur (Gujarat) seems to be the start for the scamsters as some audacious villagers may also have had punters from other countries fall for it. After a team of Gujarat police busted Molipur’s ‘IPL’ targeting Russian punters, Uttar Pradesh police also caught a fake cricket league scam in Meeru. People of both the teams had the same modus operandi, o are the masterminds — Asif Mohammed and his aide Ashok Chaudhary — the investigation reveals. This was confirmed by the senior officers of Gujarat and UP police.

Deepak Bhuker, SP, Hapur (UP), said, “The accused had been running the Punjab Big Bash league matches for four days at Sudha cricket grounds in Meerut. We received information that the fake cricket league matches were being held to accept bets from Russian punters. We raided the place and arrested Shitab Zahid, a resident of Meerut, and Rishabh Dhanesh, a resident of Gwalior.”

Bhuker also revealed that the two men were working for Mohammed and Chaudhary who are based in Moscow. Dhanesh used to receive INR 40,000 to INR 50,000 per match. The accused picked the local cricketers and united them as Ranji cricketers. They had also created a viewer box and live-streamed the games on a YouTube channel. The bets were being accepted through a channel on Telegram messenger.

Before organizing the match at Sudha cricket grounds, the accused had rented a school ground in Meerut where they had organized matches for around five months, said Bhuker. He said that the accused may have duped punters from other countries too.

Asked if the cricket league scam could be prevalent in other states, Deepak Bhuker, SP, Hapur (UP) said, “It now seems likely that the accused may have links in other states too.” On the other  hand, Mehsana SP Achal Tyagi confirmed, “The sleuths also found similar names like Shoaib Davda in the chats following the arrests in Meerut. Besides, hawala transactions from Delhi to Mehsana are being probed.”


On Friday, a Special Operations Group (SOG) of Mehsana police raided a farm in Molipur where the fake IPL was taking place and all the accused were arrested. The cons who set up “IPL” matches at a farm in a Gujarat village accepted bets from punters in the Russian cities of Tver, Voronezh, and Moscow.

ALSO READ: Mushtaq Ahmed Reveals The Tips He Gave To Virat Kohli Ahead Of England Tour

The cricket matches were broadcast live over a YouTube channel labeled “IPL” for over a fortnight. “Chief organizer” Shoeb Davda was one of the masterminds behind the con. He readied 21 farm laborers, promising them Rs 400 per match. They even did umpire, flaunting a few walkie-talkies in front of five HD cameras. 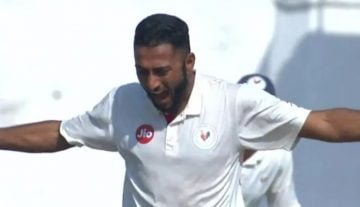