Afghanistan have made history by defeating one of the strong teams in the World Cup this edition, Pakistan, in their first warm-up game in the County Ground, Bristol on May 24. Captain Gulbadin Naib was happy with the performances of the bowlers as they restricted Pakistan within 262 on board. However, he was not impressed with the batsmen as he believed it can be improved a bit.

“Pakistan are a good team. I respect them and they have huge respect in the cricket world, so today is our day and we played some good cricket,” Naib said after the warm-up match.

“I thought before the start of the game we would need 300-plus runs in my mind, but the bowlers did really well – the likes of Hamid Hassan, Mujeeb Rahman and Mohammad Nabi. That’s what helped us defeat them as they finished on 262. We have the bowling attack to be able to do that but we need to improve in our batting,” he added.

He shared that beating Pakistan was important but they need to improve constantly to stay there in the tournament.

“Today is the day we’ve been waiting for, especially all Afghanistan fans. To beat Pakistan on this kind of stage is not a small thing for us, this is big for us. I have full confidence in my team, the morale is very high among the boys and we’re really excited to be here. I am sure we will improve more and more as we go on,” he explained.

“It is a good start for our team and for the last eight months we’ve waited for this day, not even just for Pakistan but looking forward for the other matches in the tournament. If you look at Pakistan’s side it’s got a lot of experience in bowling attack, Wahab Riaz bowled really well, so the game was in our hands and we just carried on and played our game,” he added.

He further shared that cricket is the reason of joy in his country.

“If you look back to my country the last 30-40 years, the situation in Afghanistan, everyone just wants a reason to smile and I think only cricket gives to them joy, entertainment and unity. I think to see our fans who are living in England, not just here in Bristol but from London, Manchester, coming and cheering on their team is the sort of support we needed,” he further told.

Afghanistan will start their World cup campaign against Australia on June 1 in County Ground, Bristol. 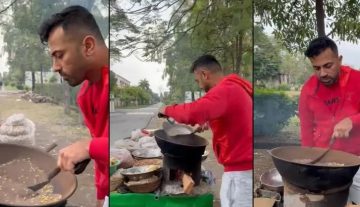 Videos
By CricShots - Jan 13, 2022
Wahab Riaz Sells Chana On The Streets To Earn His Bread In Pakistan?