The latest Test debutant for India, Hanuma Vihari credited former India skipper Rahul Dravid after scoring a half-century on debut in the fifth and final Test against England at The Oval on Sunday. He also revealed that he shared the news of him making his international debut with Dravid after India’s playing XI for The Oval Test was announced.

During the press conference after stumps on Day 3, Vihari said, “I got to know the day before the match. Obviously, I was very thrilled. I first informed my family about it and they were very very happy as well. I called him [Dravid] the day and told him I was making my debut. He spoke to me for a couple of minutes and gave his inputs and I thought it eased my nerves a little bit because it’s coming from a legend and you know that you belong here. He just told me that you have the skill set, you have the mindset and the temperament, just go out there and enjoy yourself.”

Along with the southpaw all-rounder Ravindra Jadeja, Vihari, provided a good partnership for the fight back. It was the 77-run partnership for the seventh wicket where the debutant latter completed his half-century and was dismissed on 56 runs off 124 balls (7 fours and only six). He also said batting along with skipper Virat Kohli helped him settle down.

Talking about his nervous batting on Day 2, Hanuma said, “Initially I felt the pressure, to be honest, going in yesterday [Day 2], cloudy conditions and Stuart Broad and [James] Anderson bowling at you. But having Virat at the other end made my job a little easier. His inputs helped me initially. I will give a lot of credit to him for helping me out yesterday initially. But once I settled down, the wicket was very good to bat on especially with the medium pacers it got a lot slower yesterday. I got myself in and tried to capitalize much as I could.”

He's batted with absolute grit and gumption and brings up his FIRST Test half century @Hanumavihari.

With his fifty on the debut, Vihari showed what India has been missing throughout the series at the No.6 position. He batted with a strike-rate below 50 and frustrated the English bowlers and slowly got the runs coming for the visitors as he grew in confidence. The last Indian to make a 50+ score on debut before him was Hardik Pandya (whom he replaced in the game).

Vihari’s ability to play spin well and negotiate the pacers in challenging conditions helped and paid rich dividends for him as well. However, his selection ahead of Karun Nair in the playing XI raised many eyebrows but he answered his critics in style at the biggest stage.

Taking about the same, the debutant said, “It’s just the start. I know I have to do a lot of things to cement my place in the Indian team, which I definitely want to do. Getting a half-century on debut is just the start.” 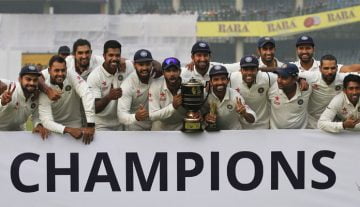