Chris Gayle and David Warner have been two of the most destructive batsmen in the history of the Indian Premier League (IPL). Both the batsmen have the ability to smash bowlers from the word go. There are a few bowlers who would have the confidence of bowling against them and achieving success. As it turns out, one of them is Indian off-spinner Harbhajan Singh.

In the 12 seasons of the IPL, Singh has had quite a few opportunities to bowl at both these batsmen. In a recent interview, the spinner explained what was his strategy against some power-hitting batsmen like Gayle and Warner. In his explanation, Harbhajan compared the technique of the two batsmen. He went on to acknowledge that Warner was difficult to bowl to because of the range of shots he has.

During an interview with ESPNCricinfo’s The Cricket Monthly, Harbhajan said, “Warner is very good on the back foot – he will cut you. He can switch-hit, he can sweep pretty nicely, he can hit you over cover. He can step out too. Compared to Gayle, Warner is more difficult for me to bowl to.”

Talking about the West Indian stalwart, Harbhajan said that he has never found it difficult to bowl to him. He pointed out that Gayle has a limited amount of shots.

The veteran Indian spinner explained, “Gayle, if someone bowls quick to him, he will keep hitting sixes. If someone bowls slow to him, he’ll have to come out of the crease, which he is not comfortable with. I have never ever felt it difficult to bowl against Gayle. I have bowled a lot at him in powerplays. He did not have a sweep. He did not have the shot over mid-on.”

The 39-year-old further praised Warner. He explained how a bowler has to be confident while bowling to him.

Bajji further explained, “Warner hits everywhere, so it is very important to vary the pace against him. Your body language, your eye contact has to be right. You cannot show him you are scared.”

Both Warner and Gayle have terrific records in the IPL. In 126 matches in the T20 tournament, Warner has amassed 4706 at the average of 43.17 with four centuries and 44 fifties. He has won the Orange cap thrice. On the other hand, Gayle has scored 4484 runs in 125 IPL matches at an average of 41.14. He has scored six centuries and 28 fifties and has won the orange cap twice. 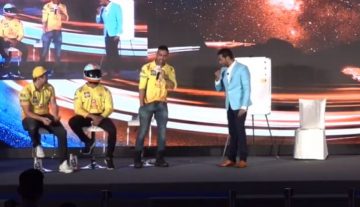 Trending
By CricShots - May 8, 2018
WATCH – MS Dhoni Reveals the First Crush of his Life