Harbhajan Singh and Yuvraj Singh took to twitter and blasted former India coach Greg Chappell. Recently, Greg Chappell spoke on how he helped MS Dhoni had laid the groundwork that helped him become one of the best finishers in the game.

Chappell revealed that he had asked MS Dhoni to play along the ground. Greg wanted to see if MS Dhoni can finish the match without taking unnecessary risks. Former India off-spinner took notice of the story and took the opportunity and came out all guns blazing against Greg Chappell.

Harbhajan Singh responded to the story and revealed the controversial ideologies of the former India coach. Bhajji took to twitter and wrote,  “He asked Dhoni to play along the ground coz coach was hitting everyone out the park.. He was playing different games #worstdaysofindiancricketundergreg”.

He asked Dhoni to play along the ground coz coach was hitting everyone out the park.. He was playing different games 😜#worstdaysofindiancricketundergreg 😡😡😡 https://t.co/WcnnZbHqSx

Former India all-rounder Yuvraj Singh noticed of Harbhajan’s tweet. He joined in on the thread and wrote “Msd and Yuvi no sixes in the last 10 play down the ground,” while taking a dig at Greg.

Earlier, Chappell was involved in an online chat with the PlayWrite Foundation. He said, “Now we talked about the fact that if he (Dhoni) could learn to hit the ball along the ground as well…even though he was good at hitting boundaries, it was still a high-risk way of playing. If he could take some of that risk out of it, he could become one of the best finishers in world cricket.”

ALSO READ: Wasim Akram feels it unfair on Sachin to be compared with Kohli

Chappell had commented, “Somehow, you’ve got to find the thrill in being the best finisher. Rather than one of the best hitters of boundaries and maybe be remembered for some exciting innings. That’s because you could become the best finisher the game has ever seen.” 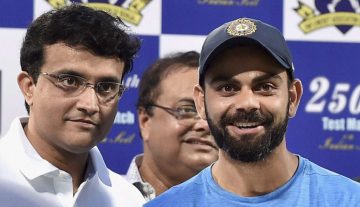