India’s limited-overs opener Rohit Sharma has again become a topic of debate in the Indian cricketing fraternity. He was clearly been discarded from Test cricket because of his ordinary show in the longest format but now found a surge in the support for his inclusion in the Test team, thanks to his flawless captaincy in the recently concluded Asia Cup where India won the title.

Rohit last played a Test match in January this year in South Africa but has not been considered for the longer format again, not even for domestic and junior international squads. He was dropped from the Test squad that played against Afghanistan at home and also for the five-match Test series in England despite scoring runs in the limited-over series preceding it.

But after his impressive show in the Asia Cup both as a captain and batsman, the uproar is back for his inclusion in the Test team. However, the national selectors stuck to their stand of thinking beyond Rohit and ignored him for the upcoming two-Test series against the West Indies at home. They even picked a new player in Mayank Agarwal while Prithvi Shaw is waiting in the wings for his Test debut as an opener.

No @ImRo45 in test team against West Indies..what r the selectors thinking actually??? Anyone have a clue ??? plz let me know as I can’t digest this

Veteran Indian spinner Harbhajan Singh was not clueless about Rohit’s exclusion from the team for the West Indies series which will be led by regular skipper Virat Kohli. Like former India captain Sourav Ganguly who also felt the same and hoped that the day is not far when Rohit will be back in the reckoning for the Tests, Singh took a dig at the selectors, tweeting: “No @ImRo45 in test team against West Indies..what r the selectors thinking actually??? Anyone have a clue ??? plz let me know as I can’t digest this”

Sharma had made his Test debut against the Caribbeans at home in 2013 and slammed two back-to-back centuries in his first two Tests. But thereafter, he could not maintain the momentum and has scored 1,479 runs in 25 Tests so far at an average of less than 40. 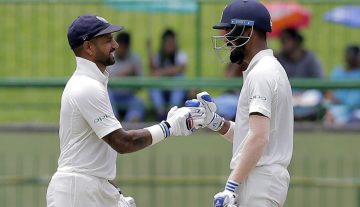