MS Dhoni’s future has consumed many headlines amid the lockdown. The Indian wicket-keeper last played competitive cricket during India’s semi-final loss to New Zealand in the World Cup 2019 in England. He was set to return in action with IPL 2020. However, the Board of Control for Cricket in India has suspended the tournament indefinitely amid CoronaVirus outbreak. Veteran Indian spinner and MS Dhoni’s Chennai Super Kings colleague, Harbhajan Singh has shared his opinion on the future of India’s wicketkeeper-batsman.

According to Harbhajan, Dhoni has already featured in his last game for India. However, The off-spinner feels Dhoni’s will definitely continue playing in the IPL.

“I was at the Chennai (Super Kings) camp, and a lot of people asked me, “Is Dhoni going to play? Will he be selected at the [T20] World Cup?” I said, “I don’t know, it’s up to him”. Whether he wants to play or not, it’s his decision,” Harbhajan said.

The veteran off-spinner added, “He will 100 percent play the IPL, but does he want to play for India anymore, that’s the first thing we need to find out. Does he feel like it or not? As far as I know, he doesn’t want to. Usne khel liya hain India ke liye (he’s done playing for India), and as far as I know him, I don’t think he would want to wear the blue jersey again.”

Speaking with Rohit Sharma, Bhajji also mentioned,  “When it comes to playing for India, I think he had decided that whichever was India’s last World Cup match was – final, semi-final – would be his last match too. That’s what I feel. A couple of people had told me, too, that this is how it will be.”

Responding to Harbhajan’s comments, Rohit Sharma revealed that even the Indian squad members haven’t received any news on Dhoni’s future since last July.

“We have not got any news. World Cup’s last match was in July, since then until now we have not heard any news. (We) have no idea (about Dhoni),” said Rohit. 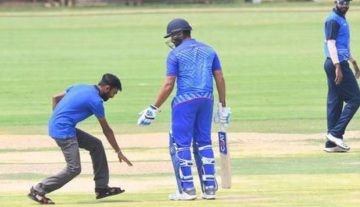 Social Shots
By CricShots - Oct 15, 2018
Ritika and Chahal Are Jealous As A Fan Kissed Rohit Sharma