India suffered a 4-wicket loss in the first ODI of the three-match series against New Zealand at the Seddon Park in Hamilton on Wednesday. However, veteran Indian spinner Harbhajan Singh took a chance to take a dig Ross Taylor for his unique celebration after he scored a match-winning century for New Zealand.

Harbhajan’s tweet started with praise for the New Zealand batsman, but it later turned into a joke pointing towards Taylor. His tweet read: “What a knock @RossLTaylor well done. Tell me why do u put the tongue out every time score 100. Good game of cricket”.

Indian Premier League franchise Chennai Super League, for which Harbhajan Singh plays, joined the trolling of Taylor with a comment, saying: “What a naak!”

According to a report published on cricket.com.au in 2015, Taylor had revealed the secret of his ‘tongue poking’ celebration which is related to his daughter Mackenzie.

Taylor had said, “Right back when I was at age group I got dropped a couple of times when I got hundreds. Then I poked my tongue out – (after) I got dropped – against Australia, my second ODI hundred. Ever since then my daughter has been pretty happy when I poke my tongue out and that’s pretty much for her as well.”

ALSO READ: Shreyas Iyer Asked A Funny Question To KL Rahul After He Smashed A Six

On Wednesday, Taylor scored an unbeaten knock of 109, including 10 boundaries and four sixes, to help New Zealand win the series opener and take a 1-0 lead. For India, Shreyas Iyer scored his maiden international century as the visitors posted 347/4 in 50 overs after being asked to bat.

However, the home team — after having suffered a 0-5 loss in the five-match T20 International series to India — bounced back and chased down the challenging target with 11 balls to spare. 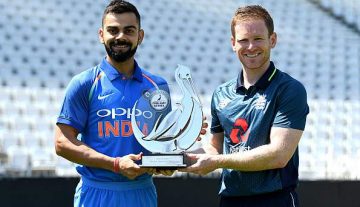