Shahid Afridi and Gautam Gambhir never had a healthy relationship on and off the cricket field. Often both these players are seen attacking each other with words. The same has been seen once again. Actually, Shahid Afridi recently made a demeaning comment on Gautam Gambhir before the India-Pakistan match in the Asia Cup. Afridi said that Gautam is such a player that no one in Team India likes.

Harbhajan Singh was also present in the chat when Afridi made this statement, but after hearing Afridi’s words, he did not defend his fellow player and was seen sitting with a smile on his face. In such a situation, now Indian fans have expressed anger over Afridi’s statement and Harbhajan Singh’s reaction.

The video of Shahid Afridi’s statement and the reaction of Harbhajan Singh are going viral on social media. It can be seen in this video that Afridi targets Gautam Gambhir. He says, “I get a lot of messages from India. It’s not like I’ve had a fight with anyone. But I and Gautam have a lot going on social media. I think Gautam is one character that the entire India team doesn’t like.”

ALSO READ: Rahul Sharma Announces Retirement From All Forms Of The Game

Shahid Afridi’s statement was as annoying as it was the reaction of journalist Vikrant Gupta and cricketer Harbhajan Singh. While Pakistani journalists started laughing out loud after hearing Afridi’s statement, the smiles on the faces of Vikrant Gupta and Harbhajan Singh were also caught on camera. Now fans are expressing their displeasure on social media.

Shame on @harbhajan_singh and @vikrantgupta73. Your laugh is as disgusting as your thinking. We all Indians luv and adore our star batsman #gautamgambhir. We won many cup because of his contributions. Learn to respect him @GautamGambhir. #IndiaVsPakistan #INDvPAK #AsiaCup2022

ALSO READ: Rohit Sharma Promises A Fan To Give A Signed Jersey After Asia Cup Final

Gambhir was the same player who scored 75 runs in the final against Pakistan in the 2007 T20 World Cup to reach a respectable 157 runs, while the highest 97 in the final of the 2011 World Cup was also scored by Gambhir’s bat. It had just come out. 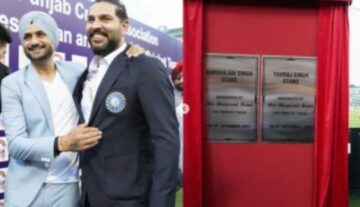