The flamboyant Indian all-rounder, Hardik Pandya, who is recovering from lower back surgery, shared a throwback picture with former Indian skipper, MS Dhoni and his daughter Ziva on Instagram on Saturday. Hardik said he is missing Dhoni and Ziva, captioned the picture “Miss this little one (and the big guy too)” with a heart emoji at the end of it.

The same picture was shared on Ziva’s Instagram account during the World Cup 2019. With Dhoni in the throwback picture, fans flooded the comment section and said that they miss him too.

Miss this little one (and the big guy too) ❤

In the photos uploaded on her Instagram account, Ziva has always been popular on the social media platform. She is her cricketer-father Dhoni’s biggest cheerleader. Whether she is teaching Dwayne Bravo how to wear his CSK cap, giving Suresh Raina a kiss, or aping her famous dad while on her iPad, Ziva has made legions of fans.

MS Dhoni’s wife who is close to the Indian cricketers and the allrounder reacted to it as she commented on it. Her comment read, “Awww Hardik Pandya, you know you have a home in Ranchi too, right?” It was heartwarming to also see Pandya’s rumored girlfriend Natasa Stankovic liked the post. Here is the screenshot of Sakshi’s comment:

Hardik successfully underwent surgery for his lower-back injury last week. He was injured during the Asia Cup in UAE last year. However, he recovered in time to play the 12th season of Indian Premier League (IPL) and the 2019 ICC Cricket World Cup in England. The injury once again resurfaced after India’s home T20I series against South Africa last month. Pandya traveled to London earlier this month with Team India physiotherapist Yogesh Parmar.

MS Dhoni has not played any form of cricket since India’s semi-final exit in World Cup 2019. He missed out on the action in the West Indies and the home series against South Africa. He also made himself unavailable of India’s upcoming assignment against Bangladesh — a 3-match T20I series, starting Sunday in Delhi. 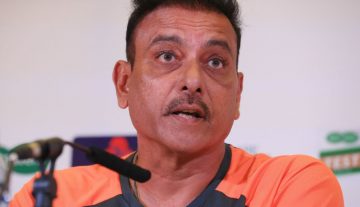 News
By CricShots - Feb 5, 2019
Ravi Shastri Hints Off The Possibility Of Resting Players During Australia Series